Three women in a minivan drive up to the Wilson Station parking lot, where the concrete is barely visible under row after row of parked vehicles. The minivan’s driver ignores the bright yellow “lot full” sign and pulls up to the parking gate.

She pleads, over the intercom, with a TTC operator to let them in.

“The lot is full,” the TTC operator repeats until she finally reverses out.

Traffic congestion and space shortage is a global, urban problem and it’s a growing one here in Toronto. For those who commute to the city from outside the downtown core, the squeeze is getting tighter.

The Wilson Station parking lot where the woman desperately tried to eke out a space is slated for closure. And, along with Shepherd West and Yorkdale stations, parking will be completely phased out by 2026, said Stuart Green, media relations for the TTC. 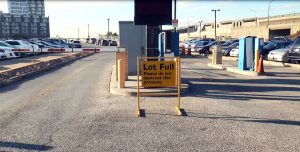 Collectively, those closures would total a loss of over 3,900 parking spaces.

But Green said those losses will be accounted for once the Yonge-University expansion opens on Dec. 17. Over 2,800 new spaces will be made available, plus approximately 500 to 1,000 at the Vaughan Metropolitan Centre.

“We know that the majority of people, two-thirds are coming from the 905 region,” Green said, referencing a study by BuildToronto, and suggesting this would solve the problem.

But not everybody agrees.

On Twitter, he called the situation a “parking crisis.”

Right now, Wilson is one of several TTC subway stations where parking lots are falling prey to  development projects.

Bus loop construction resulted in the temporary loss of 230 spots, adding to the 610 spots removed last December for commercial development.

Down the line at Finch West, construction took away another 500 spots. Islington Station’s lot is temporarily closed for Hydro One upgrades, and Kennedy Station will be closed until 2021 for the Metrolinx Crosstown Project construction.

Luca Antonini, a fourth-year Ryerson University student, lives down the street from Wilson Station. He says the parking lot has become a hot commodity lately.

“If you want a spot, you have to get here at 8 o’clock,” he said. “It’s pretty busy since they put in this temporary bus bay. There’s always been a line to get into the parking lot. I’ve seen the line wrap around down the street. It’s insane in the morning.”

Green isn’t surprised to hear that.

“This is not an uncommon problem. It’s not a new phenomenon,” Green said. “It’s just a symptom of more and more people living in the region and choosing to take public transit.”

Graham Haines, research manager for the Ryerson City Building Institute, said figuring out how to deal with congestion is one of the major problems cities are grappling with.

Instead, said Haines, cities need to look towards solutions for the last mile.

“The last mile assumes you’re taking transit to get to-and-from work or to-and-from school, and it’s about that last mile. It’s always the most challenging,” he said. “The transit trip is easy, but often getting to transit, especially in the suburbs, can be a challenge.”

While he said taking away TTC parking lots is “unfortunate,” he said it’s part of the natural progression. Wilson’s lot will be traded in for condos, which Haines sees as an upside.

“When we talk about where can we accommodate new people who want to live in the city of Toronto, putting them close to transit is probably the best way we can make sure that those people aren’t super contributing to more congestion,” he said. “That’s part of the give and take here. Losing parking means less parking at TTC stations, but it also hopefully means fewer people driving to TTC stations.” 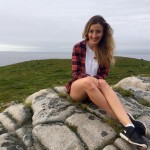