Seven years ago, Aaron Labbé was unable to go outside without being stricken with intense anxiety. He said he could not escape from an overwhelming sense of despair at how badly people treated each other. His condition led to a “major nervous breakdown resulting in heart arrhythmia,” he said. Now, along with other things he needs to do to maintain peace of mind, he meditates.

Labbé was living in Buffalo at the time he sought medical help. He had a long list of diagnoses, like borderline personality disorder, bipolar 1 disorder, panic anxiety disorder and substance abuse. He was prescribed 15 different medications until one was found to be effective.

The trial and error of his treatment was not without consequences; one drug put him in psychosis, for which he was institutionalized. A music student at the time, he was forced out of the music program at the SUNY Fredonia School of Music in Fredonia, N.Y. 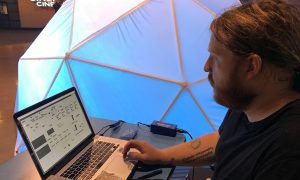 “My symptoms, since they were in several different categories of diagnoses, they (doctors) gave me a bunch of pills until I reacted well,” he said. “It was a very difficult process. It took me years to recover.”

Many students are like Labbé and deal with clinically diagnosed mental illnesses requiring medication and psychotherapy. Others deal with conditions which, although they don’t make life completely unmanageable or put their lives at risk, still limit their achievements. Depression, anxiety, pessimism, fear and lack of self-esteem exist in people on a spectrum of severity with a variety of causes.

Ryerson’s counselling centre is the go-to place for students to secure help when balancing daily life challenges becomes difficult. To supplement its service, the RSU closed the used book room in 2016 to create a student wellness centre. But a year later, it is still not open. Aside from help from the university, there are scientifically sound methods for improving mental health. There are resources for those not in crisis and who do not want to go to the trouble of waiting for scheduled appointments. These people tend to not realize their academic potential and are struggling socially, or are just not enjoying life.

In March this year, Diana Brecher and co-creator Deena Shaffer piloted Thriving in Action. The program is part of ThriveRU, a Ryerson initiative headed by Brecher that aims to optimize students’ abilities by training them to develop life-coping skills. Brecher said the program is designed to support students on academic probation who require academic accommodation or are on the wait-list for the counselling centre.

“It’s saying how do we go from neutral, where things are OK, to things are really great.” Brecher said.

The clinical psychologist has worked in the counselling centre for most of her 27 years at Ryerson. Now, she runs ThriveRU full time, offering training for faculty and staff as well as students.

Ann Rauhala has taught at Ryerson for nearly 20 years and brought Brecher’s philosophy to Ryerson’s Faculty of Communication and Design (FCAD). Rauhala ventured into meditation on her own and saw the need in her students.

“My personal interest was very much founded by a feeling of concern and helplessness because I was seeing students suffer,” Rauhala said.

She was witnessing the same issues in students: a desire to succeed and, despite talent and intelligence, coming up short. “A high school teacher once said to me that every student wants to succeed. So a student who isn’t succeeding is almost never choosing not to succeed,” she said. “We all find our ways of dealing with our challenges and some people could really benefit from just a little bit of help.”

Rauhala helped organize an introduction to mindfulness meditation, open to all professors and staff in FCAD, after inviting Brecher to work with members of the journalism faculty. She and Brecher also presented to a Ryerson-wide faculty conference this spring.

Meditation is studied widely in the scientific community as a method of dealing with mental health issues. In some cases it has been effective in moderately reducing anxiety, depression and improving attention.

In one study published in the National Academy of Sciences, 40 undergraduate students were given five days of 20-minute meditation and mindfulness training. Overall, the result showed a reduction in anxiety, depression, anger, fatigue and a “significant” decrease in cortisol, a stress-related hormone.

Another Harvard study led by Dr. James E. Stahl offered an eight-week program of “different mind-body approaches, including meditation, yoga, mindfulness, cognitive behavioural skills and positive psychology.” The study found that people in the relaxation program used 43 per cent fewer medical services than they did the previous year, suggesting yoga and meditation could reduce health-care costs significantly if used widely.

Though Labbé’s treatment was rocky at first, he said he is in a better place now. Having determined the proper balance of medication, he still works to tame his mind. Meditation is part of his regime.

After parting ways with the Fredonia School of Music, Labbé sought a bachelor of fine arts at Ryerson’s new media program. For his third-year project he wanted to develop a piece of music that had therapeutic effects. He used sounds that had been shown to reduce anxiety. In his user testing, he found his medley had this effect on many. 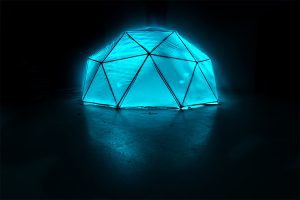 Not everyone responds in the same way to the same stimuli, so for his fourth-year thesis project, he came up with a new idea.

“What if you could go into a space or you could wear something that was unique to you in order to get you to a state of serenity or meditation,” he said. “That’s where Lucid was conceptualized.”

Lucid looks like a dome-shaped tent made of white material. It’s an immersive sensory experience meant to deepen the state of a user’s meditation. Coloured lights are reflected, while the user listens to music and has their brain waves measured by an electrode-embedded headband connected to a computer program. The music and light changes, depending on the brain waves measured and what will induce a deeper meditative state.

After a couple minutes, Lucid produces a personalized music track, which, based on the recorded brain waves, is supposed to have the same meditative effect when listened to at home.

The brain waves Labbé and his colleague – biomedical engineering student Zoe Thomson – are trying to enhance are called theta waves. Theta waves are present during REM sleep but are also found in states of concentration, mental effort, calculation and problem solving, like when someone is aiming a rifle, driving or listening to music, writes Sara Adaes in World of Psychology.

“I think a lot of the things we do now produce faster brain waves in us. To actively slow down our minds is necessary,” said Thomson, whose job with Lucid is to develop the scientific research necessary to make the experience more effective for more people.

Labbé graduated last year and now has Lucid in Ryerson’s Trans Media Zone, where his team is developing its technology to eventually offer users a personal version they can use at home, as well as a much larger one for group meditation. His intention is to eventually get medical professionals to prescribe Lucid as a treatment for mental illness symptoms and as a supplement to medication. He hopes to help lower the quantity of medication consumed by those with mental illnesses.

“Maybe one day, if we’re lucky, they’ll let us into hospitals,” he said. “I don’t condone that you should stop taking your medication necessarily, but with Lucid I want to at least improve the quality of your life. We have the tools that I know work, we just need to make the content.”