According to Global News, paramedics were called to the scene around 4:45 p.m., and have since transported the man — who is believed to be in his 40s — to a local trauma centre.

Police took to Twitter to provide an update on the situation, saying that the circumstances surrounding the incident have yet to be determined.

Witnesses report seeing the man being loaded onto the gurney “alive but in rough shape.”

An investigation is ongoing. 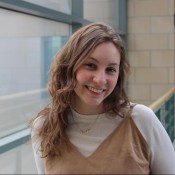 Does anyone know if the man survived? I was there when it happened. I stayed beside him until security arrived.