It was from Reid Mitchell, Director of Hockey and Scouting for the Toronto Maple Leafs, telling the Ryerson Rams’ starting goaltender that he might be needed at the Leafs’ practice the next morning.

The Leafs planned to give one of their goalies a day off, and the Toronto Marlies were away on a road trip, leaving an open spot between one set of pipes.

“I was probably more excited than nervous,” Passingham said.

Passingham then received another phone call. This time, he was informed that he would definitely be needed on the ice.

By the next morning, Passingham was dressed in blue and white. “It was pretty cool to be with them, doing the things that I see them do on TV all the time,” he said.

He said the experience was fun, but once he stepped on the ice, it was all business. “It was pretty serious because they are trying to make playoffs right now and they need to win every game. I just went in there like it was any other practice.”

But this wasn’t the 24-year-old’s first gig with an NHL team.

A few years ago, after playing in the Ontario League Hockey (OHL) for the Windsor Spitfires, Passingham was asked to fill a similar role with the Detroit Red Wings. He said that experience helped him prepare for this one.

“I’ve already experienced something like that so I wasn’t as nervous,” he said.

But even though he didn’t get to talk to Bernier, who he calls one of his favourite goalies, he did get to leave with something special: a puck and a practice jersey. 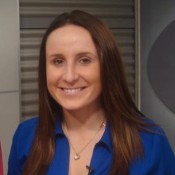