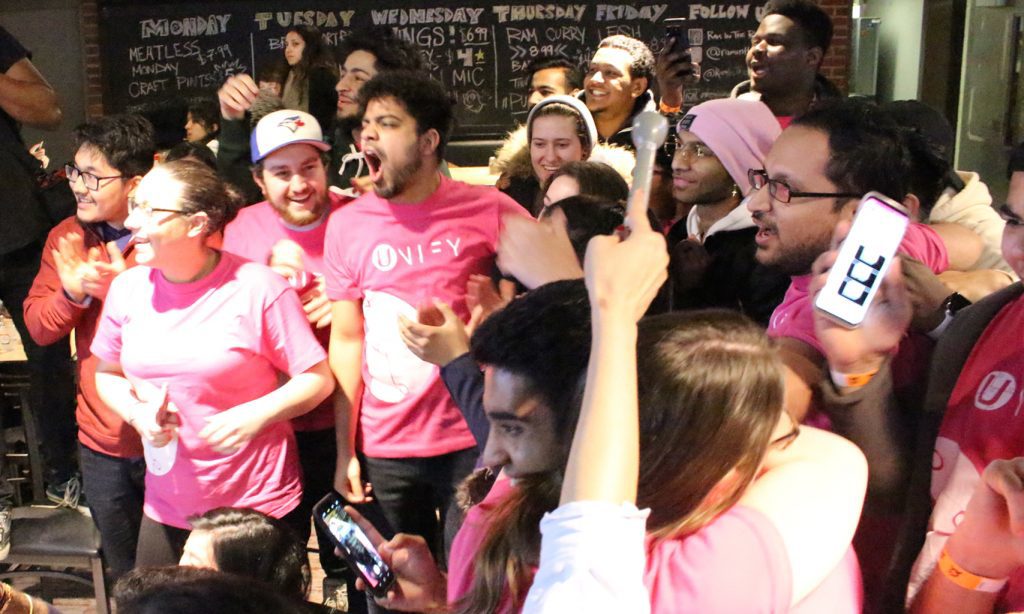 The Ryerson Students’ Union (RSU) held its monthly board of directors meeting on March 27. The motions on the agenda included the creation of a new Centre for Educational Research and Policy, the approval of the U-pass question to be presented to students come the fall semester separate from the university as well as policy amendments to the Good Food Centre and Sexual Assault Survivor Support Line.

A motion was put forward to change and add the policies of the Good Food Centre which works to reduce food insecurity on campus as well as the Sexual Assault Survivor Support Line which provides support to victims of gender based violence.

The restriction of the budget for the two programs to be used strictly for the programs themselves as well as the commitment to staff the programs during the year have also been added.

The final approval for operating budgets will still be up to the RSU’s board of directors.

Creation of the Centre for Educational Research & Policy (CERP) – Passed

A motion to create the Centre for Educational Research and Policy or CERP, a body focusing on developing recommendations and critiques to post-secondary educational policy, was put forward.

According to RSU vice-president Daniel Lis, CERP will listen to complaints from students who think they are being treated unfairly, for example receiving a lower grade than deserved, and will advocate on their behalf.

CERP will be created to focus on "educational policy recommendations" and "Open Education Resources (OERs)" among other educational developments.

“When you’re dealing with an unfair rule in the process of appealing a grade, it’ll be an organization like CERP that could take a look at that rule and make recommendations to change it, similar to something that the ombudsperson does. But CERP will not also work in the University level but provincially and federally to make educational recommendations on those policies.”

CERP will also look into the development of Open Educational Resources (OERs), or open textbooks which are digitized texts that don’t have any restrictive licenses.

Approval of the U-Pass question – Passed

The last major motion for the board to approve was the Universal Pass (U-Pass) question, which would eventually be presented to students come fall 2018 in the form of a referendum as well as present to the Ryerson Board of Governors (BoG) for their approval during their meeting on Mar. 29.

Question to be presented to the Ryerson Board of Governors pertaining to the U-Pass referendum is now being decided on, as put forward by Lis.

The U-Pass would provide students with unlimited travel across the Toronto Transit Commission (TTC) during the academic year at a lower cost than the current Post-Secondary Metropass. The TTC board approved of its implementation unanimously on March 28.

The question that was approved reads as: “Are you in favour of a Universal Transit Pass (U-Pass) at a semesterly cost of $282.00, which would provide unlimited travel on Toronto Transit Commission (TTC) services for the enrolled semester, adjusted annually and accordingly with administrative and transit costs by no more than five percent? Yes OR No.”

It was previously reported that the U-Pass was going to be implemented at a cost of $280.00 per semester, but the price has now been raised to $282.00, or 50 cents a month to pay for the administrative work on the pass itself.

“The board gave us some very good recommendations on how to present it most fairly and best to students,” said Lis.

The board was also notified of a change to the responsibilities of the vice-president education, namely the management and overseeing of CERP. Since it is a bylaw amendment, the motion can only be ratified at RSU General Meetings, and will then be presented at the Fall 2018 Semi-Annual General Meeting.

A new student group called Muslim Womxn at Ryerson was ratified. The group will focus on creating a group that is inclusive of Indigenous, Black, Brown, LGBTQ Muslims.

Another student group focusing on looking into and implementing alternative learning methods was also ratified.

“What it was is at the end of the day, we’re here to represent the students and obviously, everything that was there was for the representation of the students, so I think it was quite successful, and we’re just getting prepared for what’s happening next year and just going from there,” says board of directors member Savreen Gosal.

‘Even Canada calls B.S.’: Toronto’s March For Our Lives