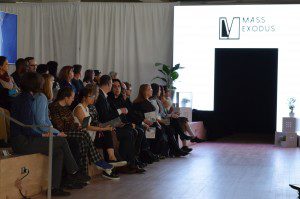 Sunday’s production of Mass Exodus raised the bar for future shows, according to attendees.

This was a year of firsts for Mass Exodus, Ryerson’s fashion show that celebrates fourth-year fashion students’ work. Most importantly, it was the first time the event took place in the Student Learning Centre (SLC), a much smaller venue than the show’s previous home at the Mattamy Athletic Centre (MAC).

There were some doubts about whether the SLC’s sixth floor, known as the “Beach,” would make a suitable runway. The MAC could seat approximately 2,500 people, while the Beach has capacity for an exclusive 540, even fewer with the runway in place.

But Dylan Kwacz, a third-year fashion communication student and producer of Mass Exodus, said he received a lot of great feedback about the new venue during the show.

“Having people from previous Mass Exoduses say (we) raised the bar is amazing,” he said. “(The SLC) is the epitome of innovation in architecture and our brand is synonymous with innovation.”

Stacey McKenzie, a model and founder of Walk This Way Workshops who is best known for being a coach and judge on Canada’s Next Top Model, said the new venue might have made this the best Mass Exodus yet.

“No offence to Canada, but I didn’t feel like I was in Canada,” she said. “It felt like Europe or New York.”
McKenzie has coached the Mass Exodus models since 2013. Mass Exodus was her first modelling gig when she was starting out.

The Beach was decked out for the event. The runway ran in a zigzag pattern, lined with one row of chairs for viewers. The models emerged from a doorway in a screen that projected images like misty forests, crashing waves and blue skies. A sound system on the lower floor blasted house music as the models walked the runway.

Bianca Bellantoni, a fourth-year fashion design student in Mass Exodus, was happy with the venue.

“The long runway gave people more time to see the garments,” she said, joking that after it was all over, “I can finally sleep again.”

However, Kristian Neilsen, another design student in Mass Exodus, said that there were some problems using the SLC as a venue.

“Because of the smaller numbers (for seating), it was a hassle to get tickets,” he said. “Many designers couldn’t even get tickets for themselves or family.”

He was also concerned about getting models from the Podium building into the SLC, but after completing rehearsals, he said that it looked amazing.

“This was not a conventional runway,” he said. “But it still made for a beautiful show.”
Kwacz said that although the show was more intimate, they did not mean for it to be exclusive. This was the first year they live streamed the event with the help of Ryerson’s RTA school of media students. It was also the first year the Mass Exodus exhibit has been open to the public. For three days, it was situated on the third floor of the SLC.

Instead of one two-hour show, Mass Exodus was split into three half-hour shows. “This made it a little more practical for the space and the people watching it,” Kwacz said, adding that in the fashion industry, a two-hour show is “unheard of.”

Todd Lynn, an internationally known designer and Ryerson grad, is the first Ryerson alumnus to curate Mass Exodus. According to Robert Ott, chair of the Ryerson school of fashion, Lynn debuted his collection at Mass Exodus 23 years ago.

McKenzie said that Mass Exodus is bigger than many fashion shows in the working world, and “that Ryerson can put this on is amazing.”

Kwacz agrees. “Mass Ex is an experience like no other in the academic system,” he said, and his goal for this year was simple. “We want people to leave feeling like they’ve seen the future of fashion.”

According to McKenzie, the SLC is the future for the show. 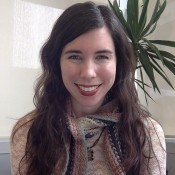 School of Journalism under fire for lack of diversity