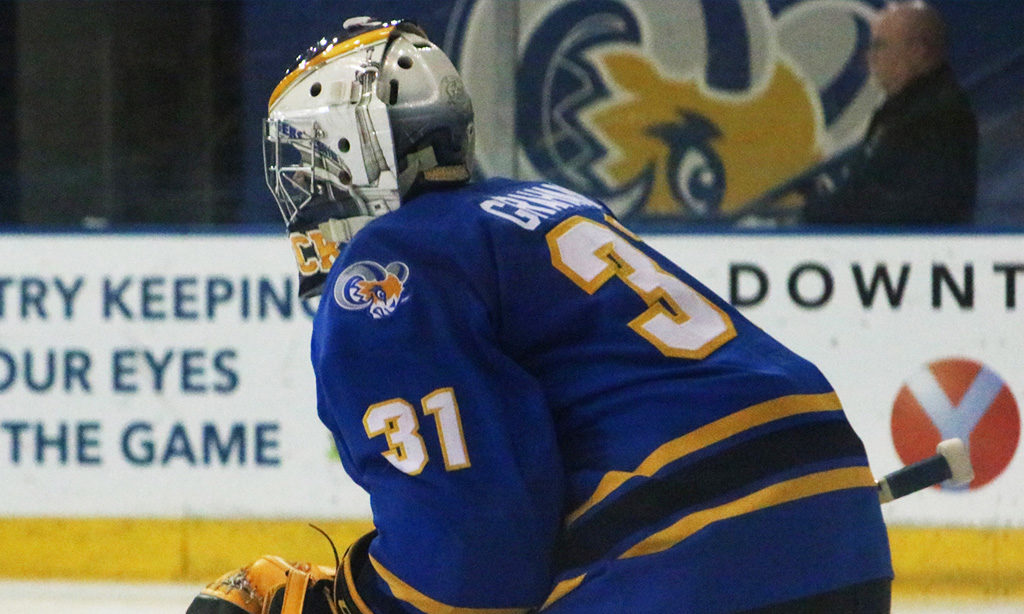 What you need to know:

For the second time this season, the Ryerson Rams men’s hockey team fell to their crosstown rivals, the York Lions, as the teams faced off on Thursday night.

The game was the start of a five-game home stand for the Rams who spent five of the last seven games on the road.

Before Thursday, the Rams were a perfect 2-0 on home ice. The loss drops the Rams to 5-2-1, while the Lions move to 6-2-0 and take the Rams’ place in the top spot in Ontario University Athletics (OUA) West.

The Rams outshot the Lions nearly two-to-one with 40 shots on goal to the Lions’ 23, but eventually dropped the game 6-2.

“Hockey is a funny sport…once in a while you run into a game where nothing seems to go well,” said head coach Johnny Duco after the game. “I think thats the product we fell into tonight.”

The Rams’ Dan Clairmont opened the scoring under five minutes into the game to give them an early 1-0 lead, but it didn’t last long, as the Lions’ Greg Milner answered with a goal of his own to tie things up heading into intermission.

The Lions carried the momentum into the second period, scoring just over a minute after puck drop.

One of the best moments of the game came during the second period, when Aaron Armstrong on the Rams’ penalty kill. The second-year winger lead a two-on-one out of the Rams’ zone and buried a shot in the top shelf to tie the game at two-a-piece.

Armstrong is currently tied with captain Michael Fine in scoring with 10 points. Through 8 games, Armstrong has already matched his goal total from last season with 5.

“I owe a lot to Johnny for giving me a chance to play a role that i’m more used to,” said Armstrong after the game. “I’m playing with more confidence out there and am able to do things that are more effective…I’m getting the bounces and they’re going in for me.”

Heading into the final frame, the Lions had a one goal lead over the Rams. So far this season, the Rams had little trouble winning come-from-behind games, but their offence couldn’t connect, and the Lions were able to handily win the game with three unanswered goals.

“They executed their systems. [They did] the little things that we were unable to do,” explained Duco. “Which is uncharacteristic of us because we’ve won it for the majority of the year and have been successful doing it.”

While the loss is something to learn from, captain Mike Fine didn’t want to dwell on it, as the Rams have a quick turnaround before they play in another battle with the University of Toronto team on Saturday.

“We need to stick together through adversity, whether we’re up or we’re down. We just have to keep playing and not feel sorry for ourselves,” said the fifth-year senior.

And while it was a lacklustre game for the Rams, it was a special night for the men’s hockey program, as long-time head coach Graham Wise was honoured for his historic career.

“I don’t think there is a better guy to be honoured,” said Armstrong about his former coach. “He’s a roll-your-shirt-up-and-get-to-work kind of guy…I just have so much appreciation for him and the kind of guy he is.”

Duco echoed his player’s sentiment, saying he was happy to see the former coach honoured.

“I just wish we had a better product out there on the ice for him,” he added.

The Rams will look to bounce back as they face off at home versus the University of Toronto on Saturday at 6:30 p.m.