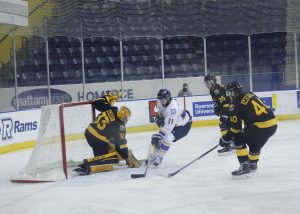 Offence wasn’t a problem for the Ryerson men’s hockey team Thursday night, as the club cruised to its third straight win in an 8-3 home victory over the Waterloo Warriors.

The eight goals scored matched a season high, recorded in October against the Brock Badgers.

With the win, Ryerson passed McGill for first place in the OUA conference and increased its lead to five points over second-place York in the OUA West division.

The Rams are back in action Saturday afternoon at 2:15 p.m. at the Mattamy Athletic Centre, as the team continues its five-game home stand.