The Ryerson men’s hockey team improved to 7-3-0 after a pair of 5-2 wins over the University of Toronto Varsity Blues and Lakehead Thunderwolves this weekend. The victories place the Rams in third place in the Ontario University Athletics (OUA) west division. 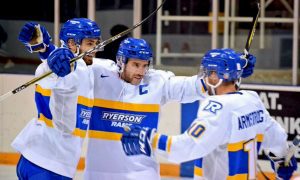 Ryerson capped off their stretch of four-straight road games on a positive note against their Toronto rivals on Friday. Two days later against Lakehead, Rams forward Cavin Leth scored four goals in one match—breaking the record for most goals by a Ryerson men’s freshman.

The win against the Varsity Blues was a team effort. Ryerson’s five goals came from five different players, an outcome that pleased head coach Johnny Duco.

“For a couple of games there it was the Leth, [Matt] Mistele and [Marcus] Hinds line that was our only line scoring,” Duco said following the win. “We’re going to continue to be a tough team to beat moving forward if we can continue to have that balanced attack and secondary scoring.”

After a back-and-forth first two periods, the Rams came out on top, scoring two goals to increase their lead to 5-2 in the third. Erick DeLaurentis scored on a penalty shot for the final tally.

Erick DeLaurentis with a penalty shot goal! The bench is ecstatic, 5-2 Rams late in the 3rd #RamsvsBlues #RTA233 pic.twitter.com/g0DTW4HzM8

With a well-rounded performance by the Rams’ offence, it might have been expected that Leth, Mistele and Hinds would slow down for Sunday’s game, but that was not the case.

The line continued to dominate, combining for 11 points. Leth had his record-breaking performance and Mistele recorded another four points, placing him second in the OUA in both goals and points, with 10 and 19, respectively.

Mistele gives all the praise to his teammates for his recent success.

“They drive the net hard and they’re great passers,” Mistele said following his performance on Friday. “They’re making it easier on me, and [our line] seems to be clicking.”

Mistele, who is in his second year, was named Ryerson Male Athlete of the Week last Monday and Leth earned that title this week.

With a strong offensive line, Ryerson should be a team to watch out for this season.

Catch the Rams back at the Mattamy Athletic Centre on Nov. 15, when they face the Waterloo Warriors.

From graduate, to starving artist