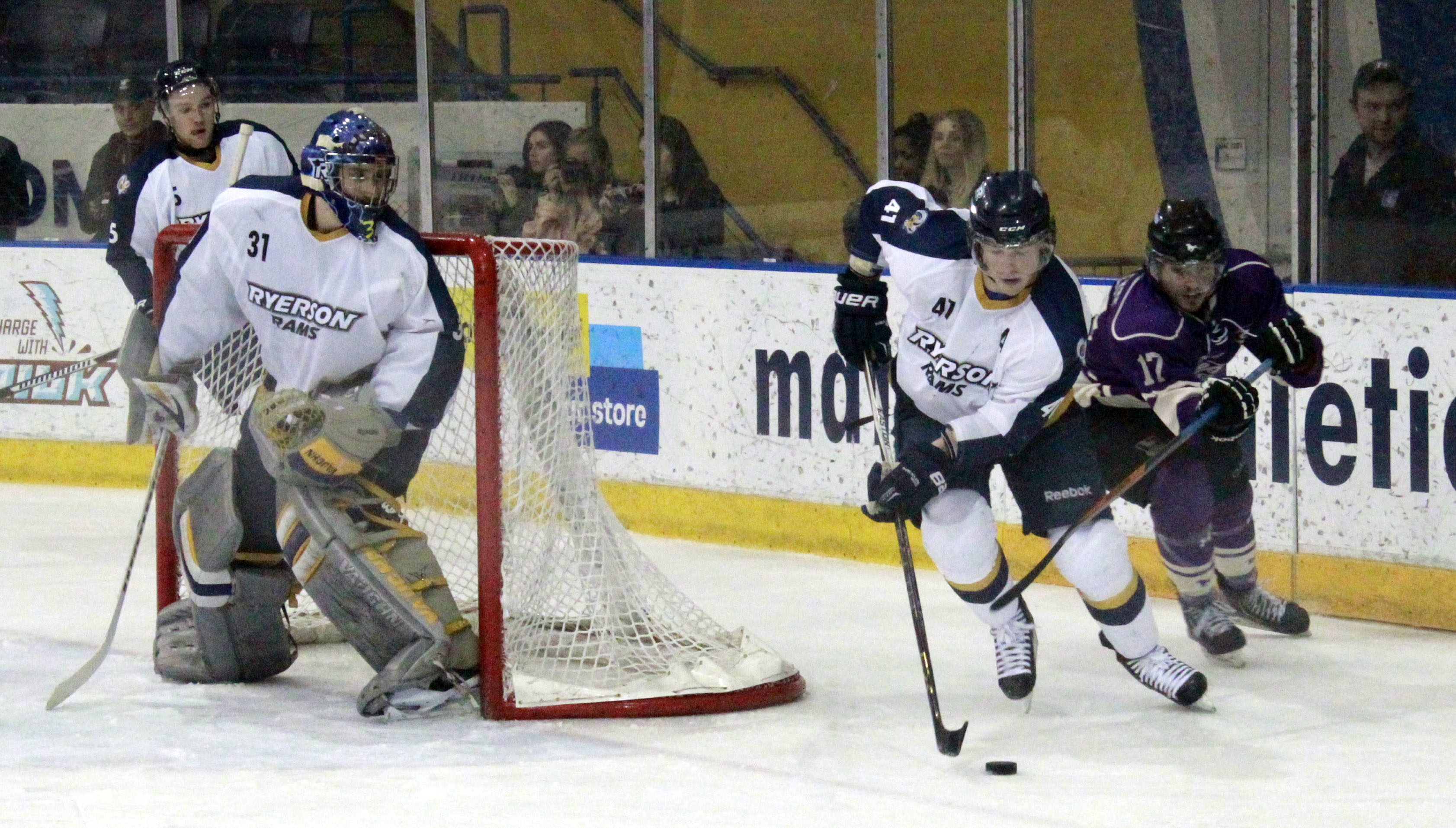 Brian Birkhoff skates the puck out from behind the Rams net. (Josh Beneteau/Ryersonian Staff)

The Ryerson men’s hockey team fell 2-1 in overtime to the Western Mustangs Tuesday night. The lose pushed the Rams record to 14-13-1 for the season, good for 29 points. Ryerson is the first team to complete its regular season schedule so it won’t know it’s playoff opponent until Friday night.

“If someone said to you going into the last weekend of the season with three games in five days, you were going to get five out of six points would you take it?” said head coach Graham Wise, in reference to the team’s two recent wins against York and University of Toronto. “So you have to keep it positive.”

This game was a tale of two goaltenders, with Ryerson’s Troy Passingham, in his final regular season game with Ryerson, going shot for shot against Western’s Peter Delmas. The two almost went two full periods with shutouts. But with just under a minute to go in the second, Western’s Noah Schwartz found a puck in a crowd of bodies and buried it past Passingham to open the scoring.

Ryerson continued to apply pressure on Delmas in the third but he was up to the challenge, including a huge stick save while Ryerson was on the powerplay. For his part, Passingham also held his ground, allowing his team to stay in the game. Both goalies made more than 30 saves in the game.

When asked if seeing his opponent playing like a wall affects his play, Passingham said it doesn’t.

“It was a close game and we both had to play well,” he said. “But I don’t even look at the other end.”

With less than two minutes to go in the third, Ryerson captain Michael Fine skated down the left wing and fired a wrist shot over Delmas glove to tie the game and force overtime.

However, overtime only lasted just over 90 seconds before a bouncing puck went over Passingham’s shoulder and dropped into the net to give Western the win.

“I didn’t even see it,” Passingham said. “He kind of just threw it to the net and it was definitely going wide. A lucky bounce but that’s how you score sometime.”

The game marked the end of five Rams careers who will be graduating: Passingham, Mitch Gallant, Jason Kelly, Brian Birkhoff and Victor Terreri. The players were honoured with a ceremony before the game.