The Ryerson men’s soccer team defeated the University of Toronto Varsity Blues in a penalty shootout on Sunday to advance to the Ontario University Athletics (OUA) final four.

The rivalry between the Rams and Varsity Blues made the game all the more intense with a ticket to semifinals on the line.

U of T eliminated Ryerson three years in a row in post-season games for OUA bronze medals. This year held a different outcome for the Rams.

Both teams had clear goal-scoring opportunities at  Varsity Stadium in Toronto. The Varsity Blues had their best chance in the first half, hitting the top right corner of the Rams’ net. Then in the second half, with three minutes before the end of regular time, a play between two of the Rams’ midfielders could have ended the game. 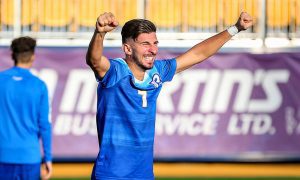 Fifth-year Misel Klisara almost found the ball after his teammate Raheem Rose crossed it into the area.

Both teams were forced to play another 30 minutes of extra time.In total, Ryerson had 12 shots on target and U of T had two.

After neither side could find the back of the net, the match went into penalty shootouts.

Leaving the game up to penalties can go either way, regardless of which team performed best during the 120 minutes of play.

The Varsity Blues made their first shot, then Rose matched the score for Ryerson. When Toronto took their second penalty kick, Rams keeper Praveen Ahilan responded with a save.

Ahilan had a momentum going and saved the next three U of T shots, stopping his opponents Marko Mandekic, Kenny Lioutas, and Lukas MacNaughton.

It was up to midfielder Klisara to score the winning goal for Ryerson and he did not disappoint, putting the ball past U of T keeper Mark Rogal.

Rams keeper Ahilan received “man of the match” for his three saves that secured a Rams win.

Back in September, the Ryerson men’s soccer team had to forfeit its first six games because of a player who did not meet academic requirements.

The Rams were able to bounce back, winning the rest of the season’s nine games and tying only one.

Ryerson will play against York University on Nov. 3 at Alumni Field for their semifinal game.