It’s 2 p.m., and the Starbucks at Brookfield Place in the financial district is buzzing with coffee consumers in need of caffeine. Among the men with string ties and clean dress shirts is Hamza Doctor, an RBC employee who works in the bank’s stress testing team.

After quitting his studies in space engineering at York University, Doctor wanted to break into the business world.

“I always wanted to break into either banking or research – something client-facing. But I had trouble doing that,” he said. 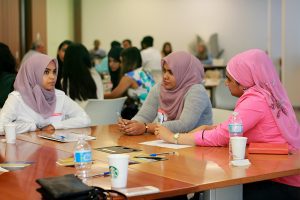 A workshop organized by MAX Mentors that occur every three months. (Photo by Hania Siddiqui)

Things began to change after Doctor found out about MAX Mentors.

MAX Mentors is a mentorship program that connects students with established Muslim professionals.

“My hope is for young people who identify as Muslim to achieve success in their careers, to further integrate in the workforce and give back to Canada,” he said. “I want us to change perceptions about what it means to be Muslim and what it means to be in this country, that would be my hope.”

Ahmed said that young people struggle in the workplace because they identify as Muslim. He said that this issue is one of the reasons why he wanted to start MAX Mentors.

“I’ve gone through things and worked really hard, but there’s still this perception of me as a person, without someone knowing who I truly am. It’s something I became more aware of as I got older,” he said.

MAX Mentors is the latest initiative from MAX (Muslim Awards for Excellence), an organization that celebrates the professional, educational and charitable achievements in the Canadian Muslim community.

Shazzaneiy Mohamed Nalir, a fourth-year public health and safety student at Ryerson, wanted to join MAX mentors because of their vision.

“MAX empowers and inspires me to succeed in my career by showing that a path to professional success as a Muslim in our society is more than achievable, even amongst the challenges that arise with being Muslim,” Nalir said.

Nalir said he and his family have dealt with negative stereotypes because of their faith. Sometimes they would be stared at, or be verbally accosted with phrases that would leave them feeling unwelcome in the country they call home.

“During a family outing last year, we were going bowling and a couple told my sister-in-law and sister to ‘get out of our country,’ ” he said.

Nalir recalled another discouraging experience when he was pointed out by two people who said, “Look, that’s a Muslim right there.”

Despite these experiences, Nalir looks forward to having a mentor for guidance and support.

“With my mentor being a fellow Muslim, they’d understand certain barriers and challenges that I could come across in terms of negative stereotypes against Muslims,” Nalir said. “Having a mentor who can advise me how to navigate these challenges is always helpful.”

Having a mentor has helped Doctor validate fears and receive professional, as well as emotional, support.

“It’s helped me build a relationship with someone who is established in their career and at some point, faced the same problems that I’ve faced as a minority in the corporate world.”

One of the problems Doctor struggled with was building relationships outside of work, especially as he was unable to participate in some social activities.

“One of the challenges about working in finance is the fact that if you don’t drink, it’s a problem. In the business world, drinking equates to trust – if you’re going to have a drink with someone that translate to, ‘Hey, I can trust them,’” said the 27-year-old banker.

For someone who doesn’t drink at all because of his religious beliefs, business culture is a problem for Doctor.

“How do you think through that awkward phase? How do you maintain your faith and your values and be successful as well?”

The Ryerson graduate meets his mentor once a month. 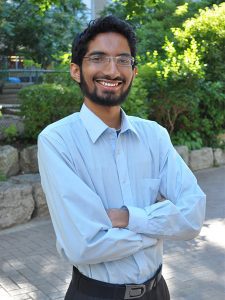 “For him to take time out to physically meet me, have coffee with me, lunch with me, it’s phenomenal,” Doctor said.

Both the mentor and mentee can apply through an online application. As of right now, there are 25 pairs and there will be an additional 25 by the end of this month.

Outside of mentorship, MAX offers workshops and networking opportunities every three months, some of which are open to the public.

In January 2018, MAX will be holding a workshop to talk about how to be allies with other Canadian minority groups and achieve social justice, while balancing one’s professional career.

Although the program itself lasts for a year, “The contact you build is a contact for life,” Doctor said.

AUDIO: Ryerson performance at the Senate