The impact of the deadly earthquake that struck Mexico City on Sept. 19 is being felt on Ryerson’s campus

Leslie Melo, who works at Pancho’s Bakery churro stand at the intersection of Yonge and Gould streets, has family in Mexico City who have been impacted by the earthquake. 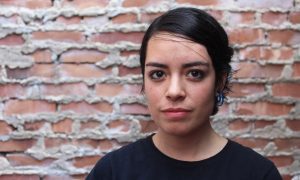 Leslie Melo was able to speak to her family in Mexico for a few minutes before phone service was cut off due to the earthquake. (Photo by Sophie Armstrong)

Thankfully Melo’s family is safe, but after speaking with them for only a few minutes their telephone connection cut off.

“I am very worried because it’s the second earthquake. The last one was last week,” Melo said, referring to the 8.2 magnitude earthquake that hit Mexico Sept. 8.

In yesterday’s earthquake, buildings, schools and homes were all greatly damaged.

“One of my friends told me that at his work the building collapsed, but he is fine now,” Melo said.

The earthquake had a magnitude of 7.1 and has killed at least 200 people, making it the deadliest since an earthquake that hit the country on Sept. 19, 1985.

The Mexican National University, better known as UNAM, is open as a space for people to collect food, water and supplies. Volunteers can bring goods there, help to organize supplies or they can place you around the city to help with disaster clean up.

Are you a student from Mexico studying at Ryerson or have family from there? Contact us at ryersonian@gmail.com