Millennials are more likely to attend Remembrance Day services than any other age group in Canada.

That’s according to results from a poll Historica Canada released Monday.

The poll, conducted by Ipsos, found 37 per cent of people aged 18 to 34 are planning to commemorate Remembrance Day by participating in an event. 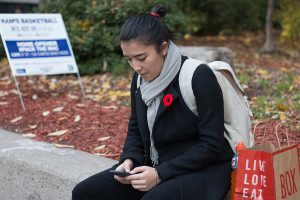 Only 23 per cent of those in the generation X category (aged 35-54), and 29 per cent of baby boomers (55 years of age and older) plan to attend a commemoration, according to the poll.

First-year engineering student Adam Ferguson is surprised by the results of the study.

“I’m walking around campus and I don’t see anyone wearing poppies,” he said.

Based on the poll results, 70 per cent of millennials are likely to wear a poppy, but they are still the least likely group among the three surveyed generations to do so.

Overall, the poll concluded that three in 10 Canadians plan to attend Remembrance Day ceremonies. This is three points higher than last year.

The poll revealed that only about half of Canadians willingly attended a Remembrance Day ceremony in the past.

Ferguson hopes to attend an event around campus and said he believes if millennials “don’t keep up the traditions, then it’s going to be forgotten.”

The university has planned its annual Remembrance Day ceremony for 10:50 a.m. on Nov. 10.

Third-year Ryerson student Brandon Moe said millennials attend ceremonies because the generation wants a way to connect with history, outside of learning about war in school or through family members.

“By wearing the poppies and going to those events, you gain that connection back,” he said.

Moe said young people can use social media to share support for veterans.

Historica Canada’s  poll suggests numbers of people attending  ceremonies will continue to climb next year, as the 100-year anniversary of the First World War armistice approaches.

Ryerson falls behind on accessibility