This version is updated with comments from Mohamed Lachemi and Sheldon Levy. 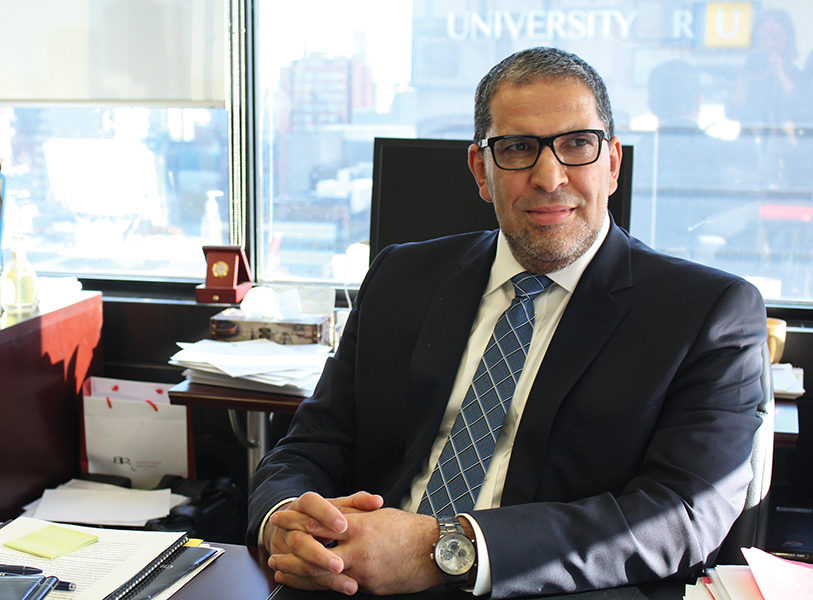 Mohamed Lachemi was approved by the board of governors as the interim Ryerson president as the search for a new one continues. (Charlotte Arnold/Ryersonian staff)

The Ryerson Board of Governors approved longtime administrator and research advocate Mohamed Lachemi as interim president of Ryerson University on Monday.

In a brief with campus media, Lachemi emphasized the need to “keep the momentum” on projects started by outgoing president Sheldon Levy, including the health science building set to begin construction on Church Street in December.

He wouldn’t say whether he is open to becoming Sheldon Levy’s permanent successor.

“I would rather focus on my job now, which is to deliver,” Lachemi added.

“So I mentioned this morning to the executive committee of the board that for me — ‘interim’ — it has to be an action word.”

Lachemi first became an assistant professor in 1998. He was an instrumental force in developing the Quality Assurance Office and various research initiatives, and helped launch the Faculty of Science in 2012 — the first new Ryerson faculty in 40 years.

He has served as provost and vice-president academic since 2013, assuming responsibility for the school’s budget.

Levy expressed his full confidence in the choice of Lachemi in an interview with The Ryersonian.

“You don’t want a learning period for an interim (president) because by the time the learning period is over, so is their term,” Levy said. “So it makes good sense to get someone who knows the agenda of the university.”

“In every respect, he is the right person and I am very pleased.”

Lachemi’s will take over Dec. 1, the day after Levy officially steps down.

He said the appointment is “an honour” and he’s eager to tackle the challenges of Ryerson’s expanding urban campus.

“It’s a place where you can always challenge the status quo.”

With files from Steven Goetz.

The Urban Hip-Hop Union gets a facelift, starting with the Poetry Slam event