BREAKING NEWS
Ryerson science departments give medical supplies to Toronto hospitals fighting COVID-19
Toronto’s global climate strike moves online
A diary: what it was like leaving residence due to COVID-19
How to study at home for exams
Student groups are taking out the social from social distancing
Arts & LifeVisual Arts & Design

Chloe Wise poses with one of her many self-portraits. (Courtesy Chloe Wise)

Canadian artist Chloe Wise is not much older than many of the students she spoke to in the packed audience at Ryerson’s Image Arts building Tuesday night. Yet, attendees had much to learn from the 24-year-old Concordia University graduate who has captivated the international art world with her sculptures, paintings and videos.

Wise’s art is a commentary on social media, identities, commercialism, religion and fashion. Her work is influenced by her experiences growing up as a female Jewish millennial in Montreal. Her oil-on-urethane sculpture Star of Larry David, for example, features a bacon Star of David to note that Jews in North America are breaking kosher culture in favour of brunch culture. Family getaways in Boca Raton, Fla. provided inspiration for Wise’s 2014 video WORST, which flips ideas of luxury-based identities on its head. The video features her parents as co-stars and is set to Drake’s song “Worst Behaviour.”

Wise spoke to students about having persistent cultivation of self-awareness and how to incorporate life experiences, no matter how ordinary they may seem, into meaningful work that engages audiences.

Her most intricate work, Literally Me, explores the dichotomy and correlation between 21st century selfies and traditional artist self-representation. In it, Wise painted a series of self-portraits of herself, each over the duration of a single day. She likened her work to daily selfies taken by millennials today and to self-portraits that artists have been painting for centuries.

“When is an artist’s interaction with themselves deemed an ironic, self-aware, web self-portrait and when is it just narcissistic?” Wise said to the audience. “Who is the person making these calls?”

A collection of art created by Wise. (Courtesy Chloe Wise)

Another of Wise’s series, Bread Bags (pictured), made international headlines when actress India Menuez wore a Chanel-inspired bagel handbag fashioned by her. Wise created the bag with urethane, oil paints and sesame seeds and Menuez took it to a dinner hosted by Chanel in New York City last October. The series was a critique on fashion trend culture. So, when media believed the bag to be an authentic Chanel bag and “had to have it,” it proved the work’s ironic theme.

“My critique was being put into action,” Wise said. “It is proof that anything can be a trend.”

Wise walked her audience through her career path. She predominantly studied painting in school. While her personal interest lies in humour art, it wasn’t until she left school that she realized she could combine the two.

“I realized that as much as technical skill is imperative to expressing an idea, the idea is imperative to being interesting,” Wise said to The Ryersonian, adding that working and interning for other artists was an invaluable way to learn their thought processes.

Wise has an upcoming installation at the Art Gallery of Ontario’s Massive Party HOTBED on April 23, solo shows at Montreal’s Division Gallery in April and an exhibit in Geneva’s Galerie Sébastien Bertrand in June. She has been visiting Ryerson classes as a guest speaker this week and holding artist critiques with undergraduate new media students and graduate fashion students. 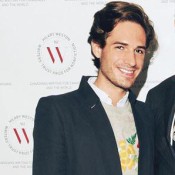