Every Tuesday, Ryan Mawdsley has a pair of running shoes on.

The 33-year-old second-year nutrition student said he tends to feel lonely in his classes and has a hard time connecting with other students.

While his class breaks into independent work study, Mawdsley eagerly waits for the clock to strike noon.

That’s when Mawdsley walks to the main floor of the Student Learning Centre (SLC) , a routine he’s participated in for the past six weeks, to join the Mood Routes group. 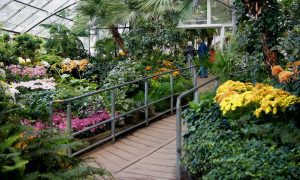 Mood Routes is a nature walk meant to help students with mental wellness on campus. Since starting up two years ago, it has led students to many local green spaces like Bamboo park and the Lester B. Pearson Garden For Peace and Understanding.

The program encourages exercise, accessibility and stress management among students.

“It’s a great way to spend an hour or two and relax,” said Mawdsley. “School is stressful, and it’s very hard to get time away from it all and be at peace when you’re studying and doing all this other crazy stuff, so [Mood Routes] is a good way to get out and see the green spaces in the city and just forget about stress.”

With Mood Routes, Mawdsley said he feels very included, connected, and enjoys all the positive benefits there are to reap on the route.

Diviya Lewis, a volunteer for ThriveRU and Mood Routes, said she specifically wants to help with the program because there is so much students can gain from it.

“The combination of walking, getting physical activity, going into green space, meeting and connecting with other people is a perfect blend of wellness,” she said.

ART suggests one’s ability to concentrate may be rehabilitated by exposure to natural environments. The theory is commonly referenced to explain the potential for nature to provide positive human health and wellness. Mood Routes exemplifies this by offering a relaxing experience while meeting new people, making connections, and deepening one’s relationship with the city.

Deena Shaffer, host and creator of Mood Routes at Ryerson, said that participants often experience an uplifted mood, an increase in energy and heightened focus after going on a route.

“When you see the flutter of leaves, or the swaying of branches, you’re in a sense of awe,” she said. “You feel a sense of peace in nature, so getting out for even an hour so close by, it’s really rejuvenating.”

This past Tuesday was Mawdsley’s sixth time joining the route, and he said he plans to make it a regular habit.

“It’s a great way to spend an hour or two and relax.”

Group participants are asked to fill out an emoji-card before and after the route is completed. It’s a very quick and engaging way to ask participants how they’re feeling by a scale of emojis.

“[After the route], 100 per cent of the time everyone feels better,” said Shaffer.

The emoji card is based on the Brief Mood Introspection Scale (BMIS), designed by personality psychologist John D. Mayer. BMIS is a recognized index or metric for people to say how they’re feeling.

“We Ryerson-ized it by way of emojis,” said Shaffer. “We did that not only to open up engagement, but to make it universal for people with disabilities.”

The idea of Mood Routes came to Shaffer when she attended the 2015 Mood Walks Summit hosted by the Canadian Mental Health Association (CMHA). It was a one-day knowledge exchange and networking summit to share the exciting success of the strides in Mood Walks’ pilot year. This created a province-wide program of green space walking groups for people living with mental health challenges.

Shaffer said the attendees at the summit had nothing but positive experiences from Mood Walks.

“We were so moved, we thought we had to do this at Ryerson,” said Shaffer.

The surface of the roads and the difficulty of the curbs are tested so that attendees in mobility devices are able to participate. According to Shaffer, the original Mood Walks name was scrapped as a true enactment of accessibility on campus.

“By calling it Mood Routes, it becomes about the route, not about how you navigate.”

Mood Routes meets every Tuesday at 12 p.m. on the main steps of the SLC, all year-round. Next week, the route will go to Philosopher’s Walk at Queen’s Park.