I was seven years old when I first realized my body didn’t fit mainstream beauty standards.

I was heading home on the school bus when a boy my age pointed out to all our friends how my shape was similar to that of a pudgy, overweight cartoon character.

I cried the whole way home. I still remember it like it was yesterday.

Up until that moment, I was unaware of how society saw my body and how it was telling me to look.

That was the moment I saw my naive self-esteem fly out the window, replaced with the unrealistic expectations of the world’s ideal body.

After that fateful moment, everything changed.

I saw myself in a completely different light. The only times I enjoyed myself were when I wasn’t thinking about my size.

It was an ongoing battle, from crying in dressing rooms in the mall because I didn’t fit into that pair of jeans to endless nights spent wishing I were born in a different body. 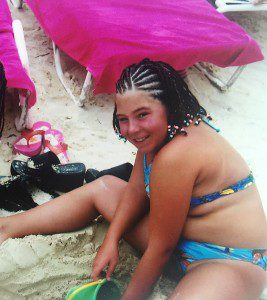 That happy girl on the outside was crumbling on the inside, constantly wondering if her tummy was being judged every time she spoke, or if that ice cream she was eating was going straight to her thighs, to the point where she’d forgotten what the flavour was.

I wasn’t anywhere near obese or unhealthy — I just wasn’t a thin child. However, for some reason, that made me flawed in comparison to those that weren’t my size.

Instead of instilling the facts like “exercise keeps your heart healthy,” the media was telling me that starving myself would make me pretty.

All of these messages were wrong, and they slowly added to the destruction of my self-worth.

Combine all of that with the anxieties that school brought along and it wasn’t a fun scene.

I was never comfortable in my own skin, I tugged and pulled and covered myself all day long, hiding behind all of the “pretty girls” in my classes.

Then came a day no one could’ve prepared a 13-year-old for. I suddenly began losing weight at a drastic speed, but accompanied by stomach pains, sore muscles and loss of energy.

I was diagnosed with Crohn’s disease and my life was never the same.

“Is she anorexic?” people would ask my mother. My body had unintentionally and unhealthily gotten to a place most young girls want.

However, being a size zero during that time in my life brought along a feeling I never want to experience again.

As horrible as getting a disease can be, I’m fortunate that it taught me that I needed to become one with my body and get it to the place it deserves to be.

Then began the metamorphosis. University started and the change began.

I shed a little bit of my younger self each and every day to the point where I almost forgot about the little girl on the bus, the one who should’ve felt this way all those years ago.

It wasn’t until I was 19 when a real shift occurred in my mind. My views of food and fitness began to take a turn.

I became focused on becoming the healthiest version of myself — not for looks, but for the fact that I wanted to take the best care of my body. I became the person I wish I had around when I was younger. 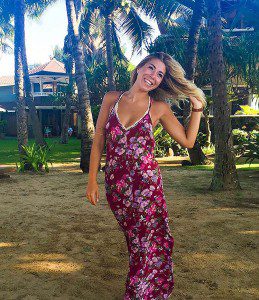 I was unrecognizable in comparison to the photos of my younger self, but that little girl is still present within me. She is always here.

She is the reason I am the person I am today. I was a happy child before the world around me told me I was fat.

Being chubby didn’t make me unhappy, but being told I wasn’t good enough because of my body was what did the damage.

Nearly one-third of children are obese or overweight. If society continues to throw unrealistic images of what perfection is in front of your face instead of instilling health, knowledge and self-love, this epidemic will never disappear.

Even now, as a 21-year-old woman, I can scroll through Instagram for days and find new ways of feeling bad about myself with just the tap of an icon.

However, with campaigns that are bringing women of all sizes to the front lines, such as American Eagle’s Aerie and the recent plus-sized model Sports Illustrated cover, young girls have women to relate to rather than compare themselves to.

Along with the constant conversation around sugar bans and the rising death rate caused by obesity, I feel that there should be just as much consideration of what’s being put into children’s minds as what’s being stocked on grocery store shelves.

How can any child get out of an unhealthy condition if the media has helped them already decide that they are flawed?

Today, I’m not a size two or an intense athlete, but I also don’t binge-eat or hide my body.

I’ve found balance in a world that runs on unhealthy statistics and waist trainers.

I would have given anything back then for the information I have today on the importance of self-love and food awareness.

If I could say one thing to my younger self, it would be this: “I know, I understand how you feel, but … listen to your body, move your feet, eat what makes you feel alive and enjoy every moment you have in your body, because it is yours, no one else’s, and your opinion of it is the only one that truly matters.”

I am more than just a #TransformationTuesday of a chubby girl who became fit.

I am someone who took control of my own body and didn’t let society’s standards determine who I would become.