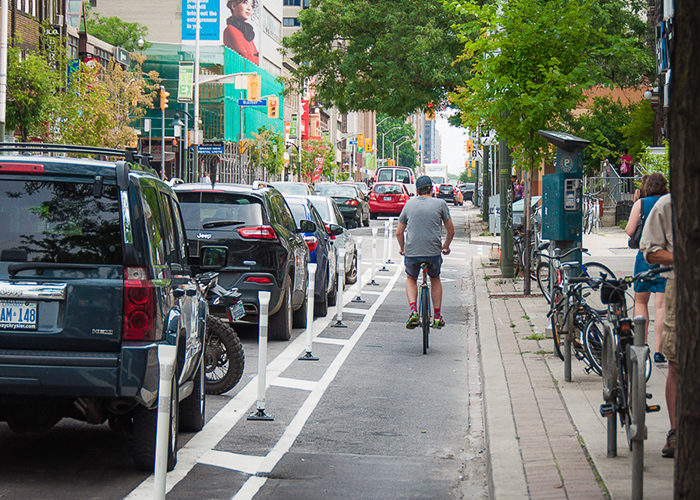 Millions of trips being taken by motor vehicle within the Greater Toronto and Hamilton Region have the potential to be bicycled instead. (Courtesy of Dylan Passmore via Flickr Creative Commons)

According to the report, 4.35 million trips currently taken by motor vehicle within the Greater Toronto and Hamilton Region (GTHA) are five kilometres or less and have high potential to be bicycled instead.

“The main goal of this study was to quantify the untapped potential for cycling in the GTHA, and identify areas with higher and lower cycling potential using a geographical analysis covering the GTHA,” said Raktim Mitra, principal investigator of the study and assistant professor at Ryerson’s School of Urban and Regional Planning.

The report found that only 30 per cent of cyclists in the GTHA are female, and only 1.1 per cent of trips by 11 to 16-year-olds to school or work are cycled. It also found that the type of neighbourhood has a large impact on cycling in the area. This includes factors such as population density, mixed-use development, bicycle lanes and speed limits.

“This regional cycling study … provides much needed context-specific insights relating to advancing active transportation planning in the GTHA … by quantifying the potential for cycling growth in this region,” said Mitra.

The report highlights the need for the promotion of active transportation options, the development of infrastructure to support these options and create higher walking and cycling potential throughout the GTHA.

“The results may work as a benchmark that Metrolinx, municipalities in the GTHA and grassroots organizations can use to identify the socio-demographic groups, trip types and geographic locations with higher potentials for cycling,” added Mitra. “[The findings enable] Metrolinx to undertake targeted and context-specific strategies and programs aimed at improving cycling rates across the region.”