The big name at cinema box offices this week is Kenneth Branagh’s Murder on the Orient Express, a lavish adaptation of Agatha Christie’s novel of the same name.

The widely-advertised, all-star cast fits perfectly in this film. The actors truly fit the roles and perform them well. Led by director Branagh, who also plays renowned detective Hercule Poirot, the 13 travellers-turned-murder-suspects are caught in a murder investigation while on board a train. Each character is questioned on identity, motivation and human conscience. 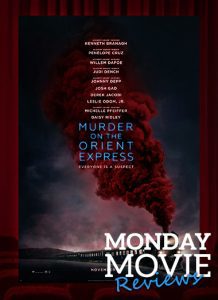 In costume and with a thick French accent, Branagh is barely recognizable and carries the bulk of the film’s plot. Michelle Pfeiffer plays the wonderful Caroline Hubbard, an extroverted and flirty passenger who’s returning home from “husband hunting” in Istanbul.

It was refreshing to see Josh Gad get the chance to really act. I was hesitant about him at first, since his recent repertoire consists of a talking snowman in Disney’s Frozen and LeFou in the live-action remake of Beauty and the Beast, but Gad takes the role of a gangster’s secretary and runs with it. Another great addition to the cast was Leslie Odom Jr., probably best known for his role in the original broadway cast of Hamilton. He gave a great performance as Dr. Arbuthnot and I hope to see him in more feature films.

I cannot review a movie featuring Dame Judi Dench without mentioning her. She didn’t have the largest role in the film, but her more emotional scenes were heart-wrenching. When she wasn’t reliving a painful past, she dominated the dining car with a wicked side-eye and her tiny dogs in hand.

The film was beautifully shot in locations across Europe and the cinematography benefitted from the setting. At times, it seemed Wes Anderson-esque, but Branagh never let it slip too far into another director’s expression. Branagh has proved successful in the past with historically-set films, and Orient Express is no exception. The camera work was also extremely effective. Several scenes were done in a single shot, like Poirot’s arrival on the train. Shot from the platform and looking in, the camera follows the detective as he heads from one end of the train to the other, offering glimpses at the other passengers.

While the movie was good overall, there were a few scenes that seemed lackluster compared to others. Some interrogations felt rushed or last-minute, which skewed the audience’s opinion on the murderer’s identity. This might have been the point though, since the final reveal – set up to place the suspects along one side of a long table in a not-so-subtle “last supper” reference – was one of the better moments of the film.

In the end, Murder on the Orient Express is a pretty great ‘whodunit’ murder-mystery at a time where the genre isn’t popular in Hollywood. Given Poirot’s assignment at the end of the film, there could be future Christie novels adapted and murders to be solved.