Trailers aren’t always the best way to judge a film.

I’ve learned this the hard way with several films before (I’m looking at you, Suicide Squad), but it still hurts every time. The Snowman is the latest film to take the olive branch I extended and snap it in half. The movie is a poor attempt at a thriller. It tries to be a lot of things, but succeeds at virtually none of them. 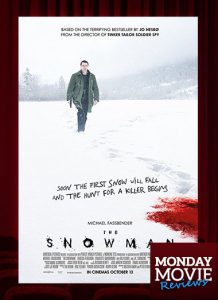 Based on Norwegian crime-writer Jo Nesbø’s best-selling novel of the same title, The Snowman chronicles detective Harry Hole (Michael Fassbender) and his mission to hunt down a serial killer. A recent string of missing women, all fairly young and married with children, is plaguing the normally crime-free Oslo, Norway. Rookie detective Katrine Bratt (Rebecca Ferguson) is convinced something worse is happening. Reluctantly, Harry agrees to work with her, which turns into him stealing her files so he can solve the case himself.

While I don’t want to pull the ‘women in Hollywood aren’t always treated fairly’ card, this movie is an addition to the growing movement. The killer targets women based on his judgement of their ability to be mothers and dismembers them with a laceration gun. This is supposed to make sense based on the opening scene, where the killer, as a child, witnesses his mother being beaten, sexually abused and eventually commit suicide. I feel the need to reiterate that since this movie was rarely coherent, it did not make sense.

As the movie progresses, the plot continues to remain unclear. Instead, audiences are forced to stumble along with the story, hoping that it will all make sense or at least be over soon. Each time the movie jumps back to a former case regarding the snowman killer, it goes on too long and –  in the grand scheme of things – does nothing for the plot.

Despite a sluggish and predictable plot, it has to be said that The Snowman is, for the most part, wonderful to look at. This probably has to do with the naturally beautiful locations of Norway, but I’d like to credit the production crew for that. The director, Tomas Alfredson, has admitted in interviews that they had very little time to actually shoot the film, and were left to build a movie out of what they had managed to get while on location.

This is a film that tries hard to be different from other thrillers. The problem with it is that it’s possibly more predictable than most films in the genre. The dialogue was flat, the characters were either annoying or boring, to the point where I didn’t care what happened to them. Despite being credited as being “some of the best on the force,” the detectives seemed to have no concept of subtlety or stealth.

When (spoiler alert!) Harry stands on a frozen lake and screams for the killer to confront him, I nearly laughed when he got shot. How could that have surprised him? Not that it seemed to slow him down though. This was followed by 30 seconds of Harry stumbling, then jumping, then running through snowbanks to return to civilization – all with a bullet in his shoulder, mind you.

If it’s not obvious, I can’t recommend this movie. Even if you’ve seen the trailer and thought, “Hey, that snowman serial killer thriller movie seems like it’d be good,” let me assure you it’s not.

The concept for the film is intriguing, and maybe if Alfredson had been able to make the movie exactly how he wanted, it would have been great. Unfortunately, that is not the case. As it stands, The Snowman is a two-hour long attempt to be something more permanent and chilling than what it’s named after.