When you think of a film centred on post-traumatic stress disorder (PTSD), the first images that pop into your head are probably war-related. You picture a soldier dealing with the recurring nightmares of mutilated corpses and the booming echoes of gunfire and bombings. You think of a character coming home from war and never being the same person they were before, never being able to settle into normal everydayness. Movies like The Deer Hunter, The Hurt Locker, or American Sniper, best exemplify this. You think of this because of where the term’s origin. “Shell Shock” became “Combat Stress Reaction”, which then became “PTSD.”

But every so often, there is a film that vocalizes the claustrophobia and hollowness of PTSD in just as an effective manner as any war movie ever could. Movies like Ordinary People, Mystic River or, more recently, Room come to mind. These films show that PTSD can come from traumatic life events just as endangering as war. Stronger, David Gordon Green’s biopic about the Boston Marathon bombings survivor Jeff Bauman, is the latest film to show just how overwhelming and depressive dealing with PTSD can be.

Stronger begins with an introduction to Bauman (played by Jake Gyllenhaal) as a humble, kind and self-deprecating individual. He is instantly recognizable because he is someone we have all known at some point in our lives. He is the guy who just can’t catch a break, despite how much positivity he constantly projects. We follow Bauman as he tries to win back the love of his life, Erin Hurley (played by Orphan Black’s Tatiana Maslany), at a bar just prior to the 2013 Boston Marathon. Jeff promises Erin that he will be waiting for her at the finish line of the marathon, with a sign to celebrate her finishing. Jeff honours that promise and gets caught in the subsequent terrorist attack, losing both of his legs from above the knee down. The rest of the film follows his readjustment to life with help from Erin, whom he reunites with, and his family.

While the actual bombing is kept fairly minimalistic to begin, the pain of Bauman’s aftermath is not. There is a slow reveal to Jeff’s newfound status as a disabled individual. We don’t see the image of his limbless body until several minutes of screen time after the bombing. The buildup is methodical, to the point where once his loss is actually portrayed, the emotional toll he’s about to take has already built up inside of us. We see his family react with suffering. We see his attempt at fighting the pain with humour. And finally, we see the bandages being taken off, and his agonizing reality begin to settle in. 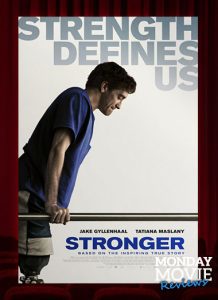 David Gordon Green’s cinematic techniques make Stronger a tearjerker in every sense of the word. He builds tension in every scene, with close-up shots enhancing Jeff’s struggle. He makes us feel like, for an instant, things are about to get better for Jeff and that his life is about to normalize. But every time he does this, he responds by shattering the world within him and around him. He allows an audience to feel empathy on the highest possible level.

Maslany’s role as Erin is also noteworthy and career-defining. No other character does a better job of showing that it’s not just the survivor who must deal with PTSD, but the surrounding family as well. She returns to Jeff through a love that had never been diminished, and takes on the role of primary caregiver for him. Though her grief, pain and trial are shown from the perspective of someone involved secondarily.

What Gordon Green’s Stronger does best though, as noted above, is provide a glimpse of PTSD for those who have never experienced it. A large, cheering crowd at a Boston Bruins game gives Jeff a flashback to the bombing, similar to the way a firecracker would remind a war veteran of an AK-47. He drinks heavier than before and struggles to connect with people the way he previously had. He folds completely into himself, into a hole that at times can seem impossibly steep for someone dealing with PTSD to climb out of. The climax comes when he indirectly blames Erin for what happened to him, and then refuses to accept her reveal that she is pregnant. Only then does Jeff become able to move forward past the trauma. Gyllenhaal and Gordon Green work in tandem to show that Bauman lost his legs and almost gave in to his internal darkness. Instead, he was reborn as someone else, someone stronger.

Stronger also has its downfalls that keep it from being a top-tier film, like a relatively weak-at-times script and the predictable Hollywood feeling of any film that’s based on an uplifting true story. But for the most part, the film accomplishes what it set out to do. Gyllenhaal and Maslany could very well earn Oscar nominees, and they would be well-deserved. David Gordon Green might nab one himself. Most importantly though, Jeff Bauman’s prevailing fight with PTSD and depression provides a stern lesson. Always be wary of what one might be dealing with, and always remember that any wall can be broken through.

OPINION: Social media and the feeling of inadequacy

Ryerson has a new fashionable partner