The Florida Project, written and directed by Sean Baker, is a film that follows the lives of several motel guests throughout one summer in a dirt-poor part of Florida. It is not a film with an overly complex plot and it is not hard to follow at all. And yet, despite how simple the film can seem at times, it is also extremely thought-provoking and emotionally deep. It is, by leaps and bounds, one of the most beautiful and captivating films to come along in 2017. 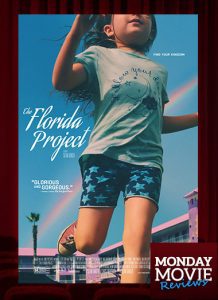 Moonee lives in the Magic Castle motel with her mother in an extremely poverty-stricken part of Florida. Throughout the film, the exuberant child displays a great sense of humour, bundles of intelligence and charisma, and a knack for occasionally devastating behaviour (such as when she burns down an abandoned motel in the film’s second act). But above all else, Moonee provides a look into the naive freedom and innocence that are often a part of one’s formative childhood years. It is through her that Baker gives us a look into what childhood can be despite one’s circumstances. Even though she has next to nothing, Moonee shows that a child always has hope and their imagination. In The Florida Project, the world revolves almost entirely around her, in as good a way as possible.

Her mother, another foul-mouth in the family, is a 20-something-year-old named Halley (Bria Vinaite in her debut role).

She is completely unfiltered and unapologetic in her actions. She’s sporadic and unpredictable, and she can’t find any legal source of stable income. She adores Moonee, and she tries her best at times to take care of her daughter. But Halley is a projection of one of Baker’s other most prominent themes in The Florida Project: the overwhelmingness of poverty. She is a product of her environment, a young woman with seemingly no chance to build a stable life. The character lacks any sort of formal education, carries with her a criminal record, and has a young child to look after with no support from anyone.

The Florida Project follows the pair as they skyrocket along completely opposite trajectories. Moonee acts as a six-year-old should. She causes mischief with her other young friends, buys an ice cream cone per day to fend off the sweltering Florida heat, and giggles as much as a child possibly can. Every scene with her is filled with joy, even though you’re fully aware of what she’s stacked up against. Halley has the opposite effect. As the film progresses and her actions become more clear, every scene with her is filled with a palpable anxiety over her destructive nature.

Watching over the two characters is Bobby (Willem Dafoe), the manager of the Magic Castle motel. In Bobby there is a glimmer of hope, a man trying to capture his idea of the American Dream. He is a forgiving man, one filled with the ability to care for others unconditionally. Along with Moonee, Bobby evokes hope, even though what he sees amongst his poverty-filled landscape could be discouraging to most. Dafoe gives one of the best performances of his life as a man inspired to find the best in anyone.

These three characters carry The Florida Project from start to finish with harmonious ease. They show three entirely different sides of a coin, and in doing so, give audiences a glimpse into a community filled with poverty.

It helps too that Baker’s film is an absolute marvel to stare at. The cinematography is among the best in recent memory. Every scene during the day is filled with aesthetically-pleasing purple and pink colours, which help to convey the nostalgic feeling of childhood. And the night scenes are lit up by dimmed lights and setting suns, illuminating silhouettes of the characters.

The Florida Project is as much a film about despair as it is about hope. It will make you laugh and smile uncontrollably, but it will also make you cry. More than anything though, it will make you feel like a kid again, if even just for the briefest of moments.