Films directed by Martin McDonagh exist in a world of extravagant violence and interminable cursing. Hearing the words shit or fuck are as likely as hearing hello and punches are not shied away from in the slightest. No one outside of Quentin Tarantino intertwines the two with such seamless results. And although McDonagh relentlessly employs these devices, it is never without cause. They are a means for character and plot development, and are byproducts of McDonagh’s effortless and brilliant scriptwriting, which is as dark and witty as ever in his latest film.

Three Billboards Outside Ebbing, Missouri, which just took home the People’s Choice Award at TIFF, shows McDonagh using those two devices more effectively than ever before. They stand as the defining traits of his self-destructive protagonists, Mildred Hayes (played by Frances McDormand, whom I can confidently say will be nominated for every award possible come awards season) and Officer Jason Dixon (Sam Rockwell). Both Hayes and Dixon showcase the rage that can fester within someone forced to live in a repressive, racist, homophobic and violent suburban town like Ebbing, Missouri.

For Hayes, the rage stems from pain over her daughter, Angela’s rape and murder, nearly a year prior to when the film opens. At that point her daughter’s murderer remains on the loose. At the onset of the film, we are introduced to her as she drives down a desolate road just outside Ebbing and notices three worn-down billboards. The following day, she meets with an advertising agent about acquiring the rights to the billboards. Shortly thereafter, the three billboards are painted with Hayes’ straightforward statement to the police of Ebbing: “Raped and murdered while dying,” “And still no arrests?” and finally, “How come, Chief Willoughby?”

The billboards give way to a trickle-down effect. Everyone comes for Hayes with efforts of intimidation and retaliation: the police force, led by Willoughby (Woody Harrelson) and Dixon; the townspeople of Ebbing; and her abusive ex-husband as well. They want the billboards down and her to be reprimanded for her actions. It all adds up to a dialogue created within the town that actually becomes just as interesting as the actual search for Angela’s murderer. The hero of the movie is being metaphorically manhunted, all because she wants closure for her daughter’s death.

And there is no mistake about it, Mildred Hayes is the hero of Three Billboards. Rarely though, from start to finish, does she act the way one would typically expect a hero to act. She is grit and anger personified. She is a walking loaded gun, ready to tear through anyone standing in her way. Despite her sometimes unbelievable actions (such as kneeing teenagers in the groin and burning down the police station), it is her relentless quest that makes her such an admirable character to stand behind.

On the flip side of Hayes is Rockwell’s Dixon, the villainous scumbag who turns into our second anti-hero. He is an alcoholic and someone who flaunts violence as intimidation. He is the man who most strongly opposes Hayes, but ultimately the one with whom she also forms a bond of mutual respect. In this character, we are given someone who makes us look at the most deeply flawed aspects of ourselves.

The ground for a masterful work of art was put in place with the creation of these two characters. But McDonagh couldn’t stop there. He added his best dialogue to date, a well-rooted story and a score that rotated perfectly with every beat. 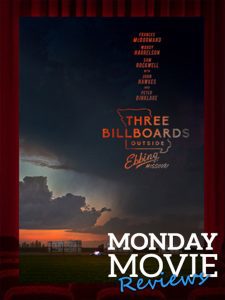 While McDonagh’s first two films, In Bruges and Seven Psychopaths were both great, they left a bit to be desired. They felt emptier thematically despite being fun and outrageous. I left both movies feeling satisfied and excited but lacking that deep bit of extra thought that comes from a truly inspiring film.

Three Billboards is that film. It makes a statement, much more so than McDonagh’s other works. It shows you how to look at yourself and try to be better. It shows overwhelming darkness, and how it can break anyone. It shows relentless perseverance and the strength of undying love.

It is the shining glory in McDonagh’s career to this point and it is easily one of the best films that 2017 has seen so far.

VOICES: An open letter to Hollywood