BREAKING NEWS
Top five COVID-19 safe Halloween activities for students
U SPORTS cancels winter national championships, all games until March 2021
Ryerson’s Jack Layton Chair hosts livestream of educators and musicians during COVID-19
Is your cough COVID, a cold or the flu? How to tell the...
Ryerson to launch a virtual pop-up gallery to raise awareness about sexual violence
Arts & LifeFilm & TelevisionOpinion

There are two types of famous actors.

There are those who slide from film to film in a chameleon-like manner, constantly changing colours and taking on roles that push them to be something completely different from what they were before. The late Philip Seymour Hoffman was a classic example.

On the other hand, there are the actors like Dwayne (The Rock) Johnson and Cameron Diaz who pop up in every movie as a partially tweaked variation of themselves.

Within this second category of actors, the person to carry the torch has undeniably been Tom Cruise, and has been for quite some time.

It’s what makes Cruise so special and arguably one of the biggest Hollywood stars of all time. No one has capitalized more on the ability to “play themself.” Cruise playing the role of Cruise in Mission Impossible, Jerry Maguire and Rain Men are all money performances. He exudes charm and charisma. He is handsome and nearly impeccable, excitable and sometimes even hilarious. He is the greatest version of Cruise in these movies, propped up thanks to insightful scripts and compatible co-stars.

But other times, Cruise playing the role of Cruise doesn’t work out, and the audience is left wanting more.

Cruise’s latest film, director Doug Liman’s American Made, exemplifies the latter. While he certainly does another solid impression of himself, the film falls flat in too many regards to be considered a quintessential Cruise film. Unfortunately for him, when someone has so many movies that are loved, or at least universally liked, a long list of comparisons is always readily available. In the case of someone always playing himself, this is even more true.

American Made follows the true events that led up to the death of Barry Seal (Cruise), a former American pilot-turned-drug smuggler during the infamous era of Pablo Escobar’s Medellin Cartel. The film shows the entire sequence of his life events, with some variations from the actual story. Seal gets recruited by the CIA, meets Escobar and the cartel, which significantly alters his life. Wealth comes in excess, as do opportunities for expansion in the criminal world and the stress of constantly having to watch your back. Everything comes to a breaking point when Seal turns on the cartel and becomes an informant for the DEA.

The movie flows too chaotically, which works for Cruise occasionally, but not for the narrative. The pace is overwhelming. At one point we’re being introduced to the characters and the next second, Seal is fully involved in an operation he can’t even begin to comprehend. There isn’t enough time to fully develop relationships with the secondary characters. So, even though Cruise is always smiling and trying to steal our attention, it feels like there isn’t ever a time where American Made slows down and appreciates him.

There are definitely some reasons to see the movie. Liman’s style of filmmaking, no matter how frenzied, is always exciting, and there are many instances of good comedy layered throughout. And of course, Tom Cruise is still good, even when he’s not great. Although he falters slightly, he is still a fun draw for the mainstream. 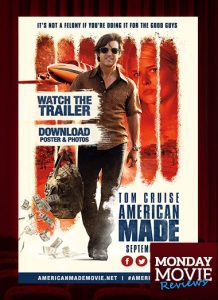 The greatest compliment that can be paid to American Made is that it does a half-decent impersonation of The Wolf Of Wall Street. It tells the story of a morally corrupt individual whom we’re not sure to root for or against, and it does so in a way that makes you feel electrified on several occasions. It is fun even though it is crass. It is worthwhile even though the only valuable lesson you can take from it is to not be a scheming, greedy asshole.

But at the same time, the worst thing about American Made is that it’s just a half-decent version of The Wolf Of Wall Street. It feels like a film we’ve seen before, only now it’s watered-down and less effective.  Doug Liman is no Martin Scorsese, and the overall experiences of the films can’t even compare. Although Cruise certainly delivers with another satisfying impersonation of himself, it’s still not enough to keep this movie from being dragged down.

Sam the Record Man will light up the city again