My lipstick and buzz cut don’t define me; neither do you

Haley Rose is a reporter at The Ryersonian. (Dasha Zolota / Ryersonian Staff)

For a woman, I have a relatively uncomplicated cosmetic life.

My bathroom has not a flat iron nor can of hairspray in sight. I don’t carry around bobby pins or hair ties. I don’t have to worry about tangles, split ends, or the way my hair looks on a windy day. I save hundreds of dollars a year by not needing to go to the salon.

But it comes with a price.

On a sunny day this past summer, I was heading to work. It was in the afternoon on a quiet residential street. I was wearing my unassuming work uniform: black pants and a button-up shirt. As I was walking, I noticed a white van speeding up the road behind me and, as it passed me, someone yelled “Dyke!” from the window.

Society likes a clear dichotomy of things. If you’re not in one box, you must belong to the other.

I stopped dead in my tracks. I stood there, stunned, trying to process what had happened. Then the embarrassment set in. The inexplicable feeling of shame. Nothing like this had ever happened to me before. I had never felt so targeted.

I shook it off and kept walking, but the memory stayed with me. And eventually, I really started to think about it.

People are negatively singled out every day for how they choose to present themselves. Some men are yelled at by strangers on the street for wearing eyeliner and heeled boots. Some women are ridiculed for wearing masculine-looking clothing. Crueller still, there are men and women targeted, due to their gender expression, for the despicable act of corrective rape.

I am a woman of small stature. I wear form-fitting women’s clothing. I wear makeup. I comfortably subscribe to just about every stereotypical female esthetic – except for the length of my hair. I’m a lucky one.

Society likes a clear dichotomy of things. If you’re not in one box, you must belong to the other. Women are to be feminine and men are to be masculine. If by chance you like to adopt qualities of the other, well then! You must be gay. No other explanation. And hey, why not put you down for that while we’re at it?

I recently saw an ad for a Canadian whiskey company that I can’t believe was ever green-lit.

The ad depicts a woman handing her pink handbag to her boyfriend before walking into a store. The man then drops the purse to the ground like a hot potato, produces a plastic bag and tentatively picks up the purse as if picking up after a dog.

All this to ensure no one sees him carrying a purse. The ad literally equates carrying your girlfriend’s purse to carrying dog shit.

“Welcome to the world of uncompromising men,” the commercial boasts. It infuriated me. Because you can’t be a man if you’re feminine, right?

My friend is an up-and-coming male model. He is as beautiful as they come. He’s endlessly elegant, perfectly manicured and has a long, luxurious mane that I could never dream of growing. He’s just about as traditionally feminine as someone can be. But he is still a man. He revels in his androgyny and the fact that people do a double take when they hear his naturally deep voice.

He doesn’t need to foster facial hair or have 10 flannel shirts in his closet to be a man. He is what he is and he does what he wants.

My womanhood isn’t the colour I put on my eyelids. It isn’t the skirts in my dresser or the high heels sitting on my shoe rack. It isn’t the way I carry myself and it certainly isn’t the fact that I like men.

What makes me a woman? The fact that I feel like one. 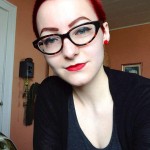 Beauty behind the mask