The $40 billion plan covers everything from homelessness to more affordable housing options.

Some highlights from the National Housing Strategy include:

The federal government also said chronic homelessness will be reduced by 50 per cent.

There will be a national housing council to make sure the plan is running efficiently, along with a national communications campaign to connect better with the public.

At Allen Gardens, a few minutes away from Ryerson University, people gathered to protest the housing crisis, hours before Trudeau spoke out about the housing strategy.

Among the approximately 50 protesters was Abdi Hagi Yusuf, who said he has a hard time finding affordable housing as an immigrant.

“We are asking all governments to open their minds and their wallets and start building housing, building affordable housing,” he said.

Yusuf works for the Canadian Union of Postal Workers. He’s concerned about the abundance of homeless people, and young workers and immigrants who cannot afford housing.

“This is an issue we want to address today,” he said.

Joyce Hall, the co-chair of Fair Vote Toronto, was at the protest on behalf of the Ontario Coalition Against Poverty (OCAP). She said she is concerned about the lack of NDP and Conservative representation in parliament. 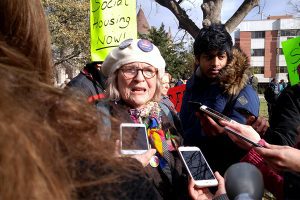 “We don’t have people at the table, in parliament, who are pushing for affordable housing.”

“If we had properly represented Torontonians, we’d have better poverty action, and a better national housing strategy,” she said.

Hall hopes that the “Liberals will actually come up with some details about how they’re going to spend the money allocated to the National Housing Strategy.”

A large portion of the funding for the National Housing Strategy was already put aside in the 2017 budget, with the exception of the $4 billion Canada Housing Benefit. This benefit will provide families who fall under certain categories a grant of $2,500 annually. This will only be available from April 2020 to 2028, and will help 300,000 households by 2028.

Half of the $4 billion budget will come from the federal government and the other half from provinces and territories. 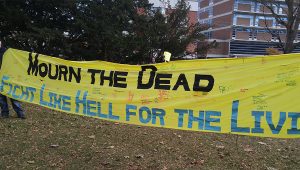 A sign reads “Mourn the dead, fight like hell for the living,” for the protest for public housing. Allen Gardens, Toronto. Nov. 22, 2017. (Photo by Natasha Hermann)

However, the funding won’t start until the next federal election.

“Toronto is in desperate need of some of those funds,” Hall said.