Post-secondary students in North America are one of the most sleep-deprived populations, according to a health and wellness report by the University of Michigan.

A report by the Sleep Journal released in November found that American adolescents self-reported that their sleep-duration has decreased. Statistics show that in 2015, 16 to 17 per cent of students were more likely to report that they slept less than seven hours most nights. Canada, along with the U.S., made it into the top three countries with the most sleep-deprived citizens.

A new national survey of colleges and universities suggests that at the same time students are saying they are exercising and sleeping less, an increase in stress and anxiety is happening.

“A lot of people will tell us that they feel more anxious after being deprived of sleep,” Kristin Maich, a graduate student in the clinical psychology program at Ryerson, said. “They also say they experience more negative emotions.”

Ryerson Centre for Student Development and Counselling offers one-on-one as well as group services to students in order to help them with things like not getting enough sleep. 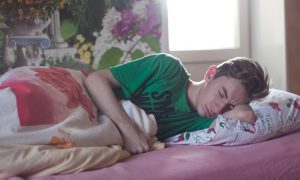 Post-secondary students in North America are one of the most sleep-deprived populations. (Courtesy of John-Mark Smith via Pixabay)

“I don’t know if there’s anything specifically that makes sleep more important for students,” said Lauren Der, a fourth-year journalism student at Ryerson. “It’s important for everyone.”

According to Maich, young adults, like students, are still developing physically.

“One of the deepest stages (of sleep) is responsible for storing memory,” Maich said.

This sleep-stage is called slow-wave sleep, or deep sleep. During deep sleep, growth hormones are released in order to consolidate both memories and stimulate physical growth. This stage occurs during the first half of the sleep cycle.

“(Deep sleep) is very important for students because it helps them to study for their exams,” Maich said.

According to a report released earlier this year by Rand Corporation, an American research organization, more than a quarter of Canadians get less than seven hours of sleep a night, calling it a ‘global epidemic’.

The report said lack of sleep jeopardizes students’ ability to learn properly and reach their full potential. Another associated risk that leads to poor mental health.

Joshua Priemski, a fifth-year student in Ryerson’s journalism program, said he is having his fair share of all-nighters.

“There are times I’m getting to bed at three or four a.m., and I have class in five hours. Those are not productive days,” Priemski said. “My energy level will be low and it’s hard to function.”

Studying for exams, assignments and trying to keep up with a social life, are all factors that make students struggle to maintain their sleep schedule during the week. For students who pull all-nighters, Maich recommends to spend the next day catching up on sleep.

“Your body can compensate for lost sleep through what’s called automatic compensatory mechanisms,” she said. “It doesn’t make up for everything, but it does for the most important parts… I don’t recommend people to deprive themselves of sleep on an ongoing basis.”

From experience, Priemski said he puts a tremendous amount of value on his sleep.

“Now, there are times I’ll sleep when I have an assignment due the next day, or I’ll call into work the next day to catch up on sleep,” Priemski said. “You just interpret the world a little differently when you’re tired.”

Maich said sleep deprived students have to use more energy to function and stay focused. However, there are no significant differences in their work compared to when they have a good night of sleep.

“Sometimes I have to try and focus a bit more, however ironically, I find it easier to deal with being sleep deprived when I’m in class studying, rather than being at home,” Der said.

The report by the University of Michigan said research showed that students who sleep more get better grades.

“Sleep plays a big role in helping students fix and consolidate memories, plus prevent forgetfulness. Without sleep, people work harder but don’t do as well,” the report said. 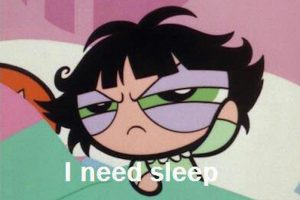 The National Sleep Foundation recommends students to get at least seven
hours of sleep a night. (Courtesy of Susan via Pinterest)

Der said she is forced to pull at least two all-nighters a semester. She said Ryerson does not overload students with assignments and exams. However, the due dates tend to be within the same few days, making it tough on students.

Priemski agrees that Ryerson does not overload its students.

“The way school is structured is so that every student has a relatively equal opportunity, so if one or two students who have a problem with managing their schedule, there’s not a lot that the school can do,” he said.

However, if it becomes hard for a student to manage their schoolwork and get an adequate amount of sleep, Priemski advises them to notify their professors.

“Professors are pretty accommodating,” Priemski said. “Just send them an honest message and most times they’ll accommodate you.”

Priemski wakes up two hours before his class every morning and commutes an hour-and-a-half every day from Scarborough to Ryerson. According to the Rand Corporation’s report, commuting is the second major cause for students’ lack of sleep, after mental health.

Maich advises students to keep a sleep diary and track how long they sleep every night. Once a student knows their average amount of sleep, it’s easier to adjust their bedtime to accommodate when they need to wake up.

“This is especially useful for commuters who wake up extra early,” Maich said.

The National Sleep Foundation, an American nonprofit promoting well-being through sleep, recommends students to get at least seven hours of sleep a night.

The American College Health Association conducted a health assessment of Ryerson’s students in 2016. The assessment happens every three years, and said out of 691 student respondents, 38 per cent faced sleep difficulties within the last 12 months.

Der said the thing that helps her most when she’s sleep deprived is coffee.

“I drink it because I like the taste, but there are times (when) I drink it to stay awake,” she said. “It makes it especially easy to manage sleep deprivation because of all the coffee places on campus.”

But Maich advises students not to drink too much caffeine in a day, especially not in the afternoon, because it stays in our system for hours after we’ve taken it, making it difficult to fall asleep.