New bill could be costly for ‘zombie’ walkers

A new bill would ban pedestrians from using a cellphone while crossing the street.

The private member’s bill, Phones Down, Heads Up Act, was proposed by Etobicoke Centre MPP Yvan Baker. It was introduced Monday morning at Queen’s Park as a response to constituents’ concerns about pedestrian safety.

The use of electronic devices, including cellphones, while crossing the street would result in a fine of  $50 on a first offence, $75 on a second offence and $125 for any further offences.

Fines would not affect people calling emergency services or those who started a phone call prior to crossing the street.

In 2015, Toronto Public Health reported that 13 per cent of pedestrians involved in collisions were “inattentive.”

Jordan Ray, executive assistant to  Baker, spoke Monday about the proposed bill and the effect that their team hopes it will have if passed.

“We’re hoping it will raise awareness about a safety issue, similar to the rule against jaywalking,” Ray said. “It’s a risky behaviour.”

If the bill passes, enforcement will be handled by local officers, Ray said.

“We’re not about to tell the police how to do their jobs…the hope is that it raises awareness of a safety issue. Even having this conversation now is a success.” 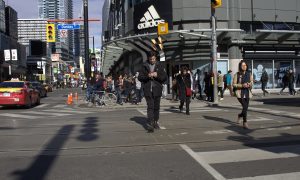 Proponents of the proposed bill say that it will help to increase safety by decreasing the number of distracted pedestrians. (Photo by Isabella Perrone)

According to a provincial coroner’s report, almost 20 per cent of pedestrian deaths involved distractions. Of those, almost 70 per cent were using an MP3 player or cellphone.

“We’re hoping that if the awareness raised prevents even one death, that’s a good thing,” said Ray. “It’s also important to point out that the major issue in road safety doesn’t have to do with pedestrians, it has to do with drivers. The road is a shared space.”

Other municipalities would have the option to opt out of the proposed bill.

“The City of Toronto passed a resolution last summer asking the province for a law like this, and at that time the vote didn’t pass,” Ray said.

“We’re conscious of what our constituents are concerned about. They’ve seen this happen more and more, and we’re hoping that it can tackle that issue.

“The other thing is that we’re conscious that each municipality knows their jurisdiction best, and if this (bill) were to pass they can opt out.”

A similar bill was passed last week in Honolulu, Hawaii, which brought attention to the issue of pedestrian safety.

MPP Baker’s private member’s bill won’t be up for debate until March.