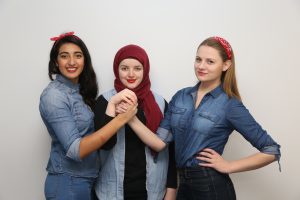 After years of paying out-of-pocket for campaign materials, student candidates in Ryerson’s Board of Governors (BOG) election will receive financial aid from the university.

Ryerson president and BoG member Mohamed Lachemi said the decision was made in response to feedback from student board members. He says the pilot is meant to “encourage students who are already running for the positions.”

Student BoG members Victoria Morton, Cassandra Myers and Mariam Nouser — who ran as FUSE slate last year — were informed about the administration’s decision on Friday. Before this pilot project, student BoG election candidates had to pay largely out-of-pocket for their campaign.

Last year, Morton referred to the elections as the “Wild West.”

“Historically, BoG has the least amount of oversight,” Morton says, and added that it’s the campus election with the least amount of set rules. “The posters aren’t stamped by any organization, there (was) no reimbursement or cap on spending limits, there’s no rules or regulations surrounding slates.”

“Almost all three of us had to reflect on whether or not we were going to (run), because the funding and cost of the election was definitely a barrier to us,” Morton says.

Myers says running as a slate was not just a political choice, but “a financially strategic move.”

“Of course, there’s always pooling resources, where a lot of slates come from,” Morton said.

Morton, Myers and Nouser said they all negotiated for an expenses cap as well. However, Morton says she understood the administration’s concerns on enforcing the caps and their effectiveness.

“There are some people who have the financial savvy to make $200 go long way and others who could spend $200 dollars on 10 posters,” Morton said. “There’s a lot of factors: personal creativity, personal popularity, pre existing skill sets that affect the equity aspect of it.”

“If you are running for one of those things then you have to spend some money for printing and so on,” Lachemi says. “I personally like it when students are engaged, and I think that this will increase the engagement of students. ”

“We have a bit of time to go back to the table and see how we can improve it,” Nouser said the BoG will reflect on how to improve the pilot after the election, adding that she’s months away from her term’s end. The victorious candidates’ start Sept. 1.

“This is the most direct way to organize to make elections more accessible,” Myers says. “So maybe students who have big ideas and big plans for the BOG could have the access to those spaces.”