A new app and ad campaign from the Toronto Transit Commission (TTC) aims to deter harassment and offer increased support to victims.

SafeTTC, launched earlier this month, allows transit riders to report an incident to transit control, or call 911 if it’s an emergency. Users can send texts, photos or videos. The seriousness of the issue will be assessed and transit enforcement officers or police officers will be dispatched as needed.

Along with the app, the TTC launched a new public ad campaign called #ThisIsWhere, formed from real-life stories of harassment as told by transit riders. 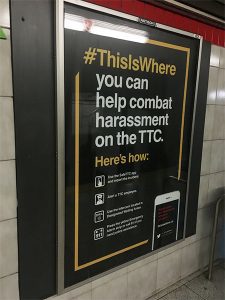 The TTC has released the #ThisIsWhere campaign to further promote discussions about harassment and assault on Toronto transit. (Photo by Angela McLean)

Jessica Garofalo, a third-year fashion management student at Ryerson, said she was assaulted by a man on a Toronto streetcar last May after only making eye contact with him.

“He took the gum out of his mouth and threw it at me,” recalled Garofalo.

The man in question appeared to be mentally unstable to Garofalo, so she didn’t respond or try to stop him. Neither did anyone else.

Susan Sperling, the TTC’s corporate communications manager, said the app and campaign were created after the TTC received an increase of harassment reports. She added that the increase in reports doesn’t necessarily mean an increase in actual incidents.

“We want to do everything we can to make sure that the system is as safe as we can possibly make it,” said Sperling.

Still, the TTC realized harassment and assault were far too common.

While SafeTTC may not manage to stop all incidents from happening, Sperling said it can help compile data and notice patterns in harassment and assault.

At Ryerson, victims of harassment and assault may visit the office of Sexual Violence Support and Education. Staff there said bystanders taking action is one way to combat harassment of all kinds.

Yamikani Msosa, a specialist at the office, said most bystanders do not take action against harassment for fear of endangering themselves. However, the TTC said bystanders play a key role in the app’s success, particularly with sending photos and videos that can help identify offenders.

While she hoped that some of the messaging could address how people should respond to harassment, rather than how to identify it, she saw it as a step in the right direction for the TTC. 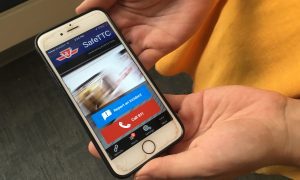 SafeTTC is an app designed to help people report inappropriate behaviour on the TTC. (Photo by Angela McLean)

“When I first started at Ryerson, it was when a lot of attacks were happening to young Muslim women on transit as well as queer and trans folks,” said Khan. “This is an opportunity for the TTC to take a stand in the conversation.”

“If I’m around someone I think could attack me, I wouldn’t feel OK taking a photo of them,” said Meghan Burns, a Ryerson architecture graduate student. “What if they got angry, or violent?”

Burns said that if someone were to become violent, it would be up to the transit operator or other passengers to help her, not SafeTTC. This could be problematic since some students said their previous experiences with reporting harassment resulted in little to no action or support from TTC personnel or fellow riders.

Burns also said that if a subway train stops in an area with no service, there is little that the app can do to help you from a predator.

With this in mind, the TTC designed the app to send reports automatically when re-entering a cellular service area. They also offer the advice to revert back to pressing the yellow emergency strip onboard subway cars.

“I’d also be concerned about people abusing the app and making reports for fun or something dumb like that,” said Valerie Hung, a fifth-year business management student.

Sperling is not so much worried about pranksters, saying that the corporate communications office is well-versed and has yet to see any misuses. Instead, she wants to focus on the end goal, which is to make Toronto transit safer for everyone using it.

“The key thing that we wanted to express to the public with this is that we are owning this issue. It happens on our system, it happens here, and here’s how we’re going to combat it.”

Is the extra sugar really worth it?