Ryerson is waiting on a response from FedDev Ontario concerning its second application for federal money to support a new startup hub in Niagara Falls. The zone is modelled on the DMZ and asks the city to pledge $4.2 million over five years to support it.

That’s down from the first application’s $10-million price tag. The more than 50 per cent reduction has not been explained. Aside from a brief given to city council noting the expense would cover programming and operation costs, details as to where the money is going have been few and far between.

But Ryerson president Mohamed Lachemi told the Ryersonian one of the changes made between applications was an overall shrinking in the size and scale of the zone’s operations.

“In 2015, we put in an application to FedDev and that was much bigger than the one we put in at this time,” Lachemi said. That inflated the cost for the city to $10 million, he said. When the first application was rejected and Ryerson reviewed FedDev’s comments, he noted, “they wanted us to reduce the overall project size.”

“That’s why the contribution, for the municipality, went from $10 million to $4.2 million. We think the chances of it getting funded are greater now.” 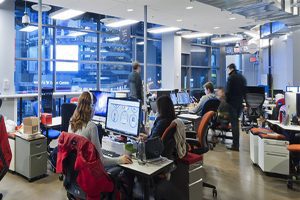 But some say the price for Niagara Falls is still too steep.

City councillor Carolynn Ioannoni said the multimillion-dollar expense doesn’t make sense for the city’s downtown, where property values are lower than in Toronto. As well, “the city of Toronto paid nothing for the DMZ at Ryerson, so why are we asked to pay?”

But Lachemi said the city has more of a need for a program like the forthcoming zone than Toronto or Montreal does.

“I can tell you if we had the same situation in Montreal or Vancouver, I don’t think we would get the same level of funding from the city as we would for regions. They have different priorities. They care about their local population and they care about creating opportunities for their youth,” Lachemi said.

“Toronto is a world class city. But outside Toronto,  the main challenge is to keep their talent locally. If we’re talking about Niagara, I can tell you that’s a big problem. They’re losing a lot of talent and a lot of youth.”

Lachemi said this is why FedDev was created — to spur growth in regions like those around southern Ontario. The viability of its projects requires cities step up.

“I don’t think we could get federal funding or provincial funding without funding from the municipality. You need to have leadership,” Lachemi said.

OPINION: I won’t miss my program