UPDATED: No enthusiasm at Ryerson for possible PRESTO changes 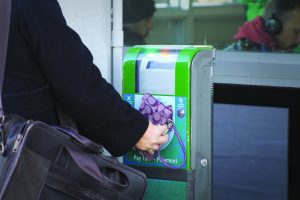 Time-based transfers would allow travellers to get on and off any TTC vehicles without restrictions within a certain time limit. (Ryersonian archives)

The Toronto Transit Commission (TTC) board approved a plan Tuesday that could give frequent PRESTO users more for their money.

The proposal for time-based transfers submitted by mayor John Tory, TTC chair Josh Colle and others, has been accepted and will proceed to council next week.

If council approves the measure as part of the 2018 budget, Metrolinx said they will have the policy implemented by August at a set-up fee of $5 million.

Much like the longstanding test project on the St. Clair 512 streetcar, which ran from 2005 until September of this year, the proposed time-based transfers would allow travellers to get on and off any TTC vehicles without restrictions within the time limits set forth – likely between 90 minutes and two hours.

The transfers would only apply to PRESTO users on the TTC, which Tory hopes will act as an incentive to increase PRESTO use from its current 14 per cent.

Tory and Colle also intend for the transfers to increase TTC usage, which has stagnated. The changes are intended to help provide some relief to low-income users of the transit system.

However, students at Ryerson are not thrilled by the proposed changes.

David Chung, a second-year computer science student, abandoned his PRESTO card in favour of a Metropass.

“I feel like I’ve upgraded,” Chung said. “I feel like Metropasses are just more convenient than PRESTO cards for my purpose.”

The student and senior Metropass costs $116.75, meaning a user would need to make roughly 39 trips each month to break even with the $3 fares they would pay each trip with PRESTO. That works out to less than two trips each weekday, making the Metropass significantly more economical for many students.

“It saves money at the end of the month,” Chung said.

Commuters outside of Toronto see even less value in Tory’s proposition. Sisters Alishba and Amber Jabbar travel to Ryerson from Brampton, and said they wouldn’t save any money on fares if the time-based transfers come into effect.

“I don’t think it would make much of a difference, at least to me. I come from Brampton, so I commute from there using PRESTO,” said Amber, a fourth-year nutrition and food student. “I don’t really travel much within Toronto.”

With classes only three days a week to Amber’s five, Alishba agrees.

“I don’t use PRESTO. It wouldn’t really make a difference,” Alishba said.

Though she doesn’t have use for either PRESTO or a Metropass, she sees the latter as a more economical option.

“I think a Metropass is cheaper than using PRESTO, so I don’t think it would make much of a difference,” she said.

Tory’s letter cited a TTC report from 2014 that noted a loss of nearly $15 million annually to fare evasion – a sum to which transfers are the biggest contributor. The same report also noted, according to Tory, that “time-based transfers are used by transit systems across Canada and around the world, and has the potential to reduce fare evasion.”

Still, students aren’t enticed by the proposition. Second-year architectural science student Elijah Ju said he is not really interested in the mayor’s ideas for PRESTO.

“I use Metropass. It’s a lot better,” he said, noting the same monthly savings as many other Ryerson students.

Tory hopes to introduce the time-based transfers following the report he and fellow councillors requested on the matter. The new approach to transfers would join other recent efforts to increase TTC ridership and accessibility, including the 2015 Kids Ride Free program and the 2018 fare freeze.

Together, Tory believes these initiatives are “encouraging a whole new generation of transit riders.”

Residents of Toronto’s downtown may find the changes enticing, as the transfers halve the cost of many short streetcar trips to grocery stores and other errands, but Ryerson’s students fail to see any value for themselves.

Safety without stigma at the Moss Park site

You actually pay $2.80 per TTC ride with the presto student discount, not $3 as it says in the article, therefore it comes out to almost 42 trips a month to break even, or about 2 times per weekday.