Harrison Browne skates past two Boston Pride defenders, takes the puck to the left, shoots and it’s all net. Browne celebrates with both hands in the air as he becomes the first openly transgender athlete in the National Women’s Hockey League (NWHL) to score.

Over a year later, this historic goal for trans athletes in sport was replayed in a room full of Ryerson athletes, coaches and staff. Browne was one of four guest speakers at the Trans Inclusion in Sport panel held at the Mattamy Athletic Centre for trans awareness month.

“Explaining that (it) was the first time a transgender athlete has had their chosen name and preferred pronouns announced on a professional team… for me, that was just me finally being able to live and play my sport as myself,” said Browne.

For Browne, wearing number 24 for the Buffalo Beauts and having his chosen identity recognized was an “uplifting” moment. He said his teammates were supportive, and the use of gender-neutral language on and off the ice created an inclusive environment. 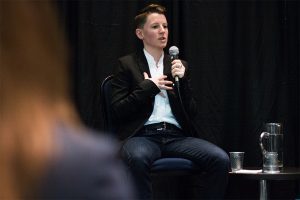 Browne is the first openly transgender athlete in the NWHL. (Photo by Natasha Hermann)

“By just having gender neutral terms, you’re automatically having everybody supported,” said Browne. “I just think it’s so important for people to keep that on the back of their minds. That you don’t know exactly what somebody is just based on what they look like, you need to think deeper and you need to be conscious.”

Although his experience was welcoming, this is not the case for all trans athletes.

Panellist Chris Spiess said they took up martial arts and trained in self-defence as a way to deal with trauma.

Spiess, who identifies as non-binary trans, trained in five different styles of martial arts and taught the sport, but is currently not competing because of barriers within these spaces. They spoke about change rooms as “scary” environments, and about feeling as though they are navigating two different lives.

Christine Hsu, who is an educator and advocate for equity and inclusion, moderated the discussion and spoke about transphobia, homophobia and sexism as barriers for trans athletes, as well as the importance of education.

Hsu said that people are wired to question others’ genders, but it’s a matter of challenging oneself and that for trans athletes, it’s about navigating within an institution that is gendered.

During industrialization in the 19th century, men went to work, leaving their sons without a masculine model inside the home, according to the article “Transgender Student-Athletes and Sex-Segregated Sport” from the Seton Hall Journal of Sports & Entertainment Law.

As a result, religious institutions, schools and businesses “organized and promoted sport as a means to separate men from women and cultivate manly virtues.”

According to the journal, team sports intended to affirm masculine qualities such as physicality, aggression and dominance for young people.

Sport became a limiting space for women and although cultural attitudes change, sports continue to be a male-dominated space.

Barb Besharat, a senior specialist for sport and recreation for Strategic Partnership Initiatives, said the myths about how male and female bodies are different must be broken down. 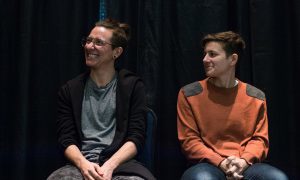 Besharat said the way children are treated based on their “presumed” gender, which is assigned by their sex, will shape the athletes they will become.

“How are we talking to athletes, how are we treating them, what’s the actual culture in the locker room? All of those things play into what kind of an athlete someone is going to be.”

Besharat said that doing this ultimately puts everyone in boxes.

Browne was involved in creating the NWHL’s policy for the participation of transgender athletes, which was implemented in December 2016.

The policy was a commitment to creating safe and inclusive spaces for its athletes. It states that the “NWHL supports athletes choosing to express their gender beyond the binary of female and male.”

However, at the university level there isn’t an official policy.

Besharat said one of the reasons the process for making a final policy has taken so long is because there are numerous ideas of what fairness is.

“Everybody wants to make sport fair, but nobody actually wants everybody to tie all the time. And so, what does fairness in sport mean?”

Besharat is on the acknowledgment list for the Canadian Centre for Ethics in Sport (CCES). CCES created guidelines that sport organizations across the nation have looked at as a model.

The guidelines were a result of an investigation about trans inclusion in sport from 10 years ago by the CCES, Sport Canada, AthletesCAN, and the Canadian Association for the Advancement of Women and Sport and Physical Activity (CAAWS).

One of the guidelines is that “trans athletes should have equal opportunity to participate in sport and strive for excellence,” and that organizations should proactively state their intention for inclusion.

Without policies, trans athletes may feel excluded, discouraged or uncomfortable playing a sport, according to “Transgender Student-Athletes and Sex-Segregated Sport.”

At Ryerson, diversity and inclusiveness is part of the university’s strategic goals in the athletics program. 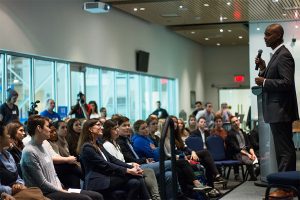 Ryerson’s director of athletics, Ivan Joseph, took the stage at the panel discussion on Nov. 13. (Photo by Natasha Hermann)

“I was part of an athletic team where, as an underrepresented population, you didn’t quite feel like you belonged – and I didn’t want that to be the message that our athletic teams and the people who are a part of the community shine and show. I wanted us to be a place that said if you show up, you belong,” said Joseph.

In the panel, Spiess asked the audience to think about who is missing from certain spaces and why. Spiess said that trans inclusion is a team effort where everyone stands up against transphobia instead of the people facing it having to defend themselves every time.

“If you don’t identify as trans or non-binary, you can’t have those experiences for you to really grasp on it,” said Hsu. “You won’t face the challenges that some of us, or many of us, will face and so it’s really important to engage in that work and really put in that effort.”