Despite Toronto’s growing opioid crisis, neither Ryerson security nor residence officials have been given the easy-to-use antidote that could prevent overdose deaths.

Kits containing that antidote – naloxone – are not being made available, according to university president Mohamed Lachemi.

“Our staff is really trained to deal with emergency situations,” said Lachemi in an interview.

“The first thing that they do after assessing the situation is to call Toronto Emergency Services.”

An opioid crisis has spread through Canada over the last couple of years, first coming to light in western cities like Vancouver and Calgary. Cities as far east as Ottawa, Montreal and Toronto are now dealing with opioid-related deaths mostly because of the discovery of fentanyl in drugs like heroin. Fentanyl is at least 50 times more potent than heroin and when injected, smoked or snorted by an unsuspecting user can bring on an immediate overdose. 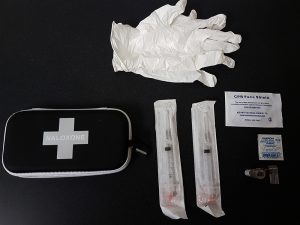 Naloxone kits include a set of gloves, a face shield, an alcoholic swab, two syringes and two vials of naloxone. (Kayla Douglas/Linsey Raschkowan/Ryersonian)

Since 2016, more than 850 Ontarians have died from opioid-related causes, according to Public Health Ontario.

According to these statistics, an average of 16 Canadians were hospitalized every day between April 1, 2016, and March 31, 2017, due to opioid poisoning. That is a 19 per cent increase from two years ago.

“I hate the idea of ‘let’s wait for someone to [overdose] and then we’re going to react.’ I think that’s a very poor mindset,” said Susanne Nyaga, president of the Ryerson Students’ Union.

“I don’t think it takes somebody having an overdose. I think it just takes students being vocal and telling us that this is a concern that they have.”

And Maria Zhang, a clinician educator at the Centre for Addiction and Mental Health and the University of Toronto, said she hopes the life-saving kits become more accessible on university campuses.

Naloxone kits are available at select pharmacies across Ontario. Anyone with an Ontario health card can get a free kit and a training session on how to properly use it.

Institutions including Western University, the University of British Columbia and Cape Breton University, as well as others, have made kits available on campus in response to the nationwide opioid crisis.

However, Ryerson security staff don’t carry naloxone kits and are not currently trained on how to use them. In the case of a suspected overdose, the protocol is for security to contact 911.

A small number of overdose cases could be the reason that opioids aren’t seen as a local problem yet.

Tanya Poppleton, Ryerson’s manager of security and emergency services, wouldn’t disclose the exact number but said that “the number has been low to date.”

Student residence leaders are also not equipped to handle an opioid overdose themselves if an episode was to take place inside a dorm.

Ryerson’s director of housing and residence life, Ian Crookshank, said that student residence leaders have not been trained on how to use the kits.

“The protocol has always been, if [a resident adviser] finds a student or a person in a state of unconsciousness, they’re contacting EMS and security,” said Crookshank. “That’s our standard protocol and it doesn’t change.”

Sydney Vanderland, a second-year business management student, also said that it would be smart to make overdose and drug-testing kits widely available.

“I feel like people can be careless when taking drugs, and most of the time you don’t know what it’s been cut with,” she said. “Educating the public and having that accessibility on campus would be a really great idea.”

For now, students who want an overdose kit on campus have to take the matter into their own hands.

“If a student were to [get trained] of their own volition because they want to be helpful… then good on them,” Crookshank said.