In her final year of high school, Jamie Lee Morin went to the guidance counsellor’s office to decide what to do after graduation. With her grades in the low 80s, she was an ideal candidate for post-secondary schools like Ryerson University. She asked the counsellor for his advice.

While discussing  school options, she told him something she hadn’t told many people: she has indigenous ancestry. He instantly replied, “No, you’re not good enough.”

Morin’s ancestry makes her eligible for financial aid in post-secondary school, but at the time she knew very little on the subject. Instead of receiving help, she was met with the same cynicism she had come to expect from non-indigenous people.

During this moment, Morin says her fear became a reality: her Métis ancestry was being associated with limiting aboriginal stereotypes. Today, she struggles to identify with the expectations of what it really means to be native.

Non-indigenous people often inaccurately associate a certain look or demeanour with those of indigenous descent. As a result, indigenous individuals often struggle with coming to terms with and understanding their diverse identities. According to the International Work Group for Indigenous Affairs (IWGIA), “self-identification as an indigenous individual and acceptance as such by the group is an essential component of (their) sense of identity.” But stereotypes and misconceptions about indigenous people create barriers to finding an identity.

The guidance counsellor’s harsh words stuck with Morin when she enrolled in the English program at Ryerson University in 2013. During her first month, she walked in and out of the Aboriginal Education Centre (AEC) on a daily basis. She would slip in to print something, sit down and pull out a book to read, or just walk around aimlessly.

No matter what she did, one thing remained constant: Morin avoided talking to anyone or making eye contact. She always wanted to go unnoticed.

This wasn’t a lack of wanting to make friends — she wanted support, but feared no one would believe she had indigenous ancestry because she was “too pale.”

This fear grew from knowing about the stereotypes associated with being indigenous.

Even though I’m a little bit darker, I still classified myself as being visually white (when I first came to Ryerson)” — Melissa Compton

Everything changed for Morin about a month later when Melissa Compton, an AEC peer-support worker and now fourth-year child and youth care student, stopped her in the hall. “You know, we don’t bite,” Compton said.

Compton says she knew exactly how Morin felt because she’d been in the same situation. She reached out to her because she was just like Morin in her first year at Ryerson – scared and alone – and struggling with societal expectations of what it means to be Aboriginal.

After working with the AEC, Compton says she’s learned it’s not about what others think, but rather how you self-identify.

More than two years later, Morin is the communications director of the Indigenous Student Association (ISA) and works closely with the AEC, but says she still encounters stereotypes.

Morin was born in Etobicoke, but her traditional territory is near Maniwaki, Que., just a couple hours north of Ottawa. The nearest First Nation reserve is Kitigan Zibi. On her paternal  side, she has a mix of French-Canadian and aboriginal ancestry, while her maternal side is English-Canadian.

(The) stereotypical image of … a native person … is generally a brown person with long hair who probably comes from a reserve and has grown up in a certain way and may have a certain tie to customs and traditions.” — Amanda Thompson

While it may already be difficult for indigenous students to accept their identities, the issue is only compounded when they’re met with certain expectations of how they should look or act.

“(The) stereotypical image of … a native person … is generally a brown person with long hair who probably comes from a reserve and has grown up in a certain way and may have a certain tie to customs and traditions,” she says.

“The reality is, particularly in Toronto, the aboriginal community … is urban and it looks very different and there are many people whose families haven’t been on a reserve in generations or they come from mixed racial and cultural backgrounds.”

Thompson says that understanding this diversity greatly impacts “whether (students) feel legitimized or whether they feel like their identities are celebrated and welcomed.”

Morin says she was kept in the dark about her identity for most of her childhood years because her father was trying to protect her. This was a decision, she says, that he thought would benefit her.

He didn’t tell Morin about their ancestry until she was 12 years old, when she came home from school and told him about a lesson they had in class about aboriginal history. He casually said, “’yeah, we actually have that ancestry.’”

She says she was confused. Why hadn’t he told her? “He said, ‘In my day, it was shameful to have that ancestry, you didn’t want to be known as the Indian,’” Morin recalls.

This shame was rooted in the idea that historically, indigenous people were seen as an inferior and uncivilized race.

One way this idea fostered in society was through the residential school system. It was developed in the 1840s and continued to operate until 1996, when The Gordon Residential School, the last federally run facility, closed in Saskatchewan.

Residential schools operated on the belief that indigenous youth belonged in separate schools from non-indigenous students. The goal was to assimilate indigenous people into the dominant Canadian culture by converting them to Christianity, which would in turn “civilize” them.

The impacts of residential schools were, and still are, deep and far-reaching. Among many things, they ostracized indigenous people, instilled shame, and created a loss of culture.

An estimated 150,000 First Nation, Inuit and Métis children were forced to attend the schools. The negative perceptions about indigenous people  reinforced by residential schools meant that their representation was minimal.

Hollywood’s limited portrayals of indigenous people also influenced public opinion. Indigenous people in movies have the appearance and demeanour of tomahawk-wielding savages from classic cowboy versus Indian movies or Disney classics like Pocahontas.

It took Morin five years after finding out the truth before she felt comfortable enough to share the truth about her heritage with friends.

“I didn’t want to tell anyone at school because I knew that they would just laugh at me and say ‘Well you don’t have a feather in your hair or any of those stereotypes that we’ve been learning in school.’”

She says she slowly began embracing her ancestry in the later years of high school, and is now actively involved in spreading indigenous awareness at Ryerson. She not only visits her traditional territory every summer, but is  a peer-support worker at the AEC and hopes of helping others the way Compton helped her.

Compton says education is the most important tool to help eliminate the stereotypes negatively impacting indigenous students. This means teaching people that being Aboriginal doesn’t necessarily have one prescribed look.

“We’re a diverse community, not all of us (fit) the stereotype of so-called R-skins,” said Morin. “We rely on this stereotype that started so many hundreds of years ago, (but) times have changed.” 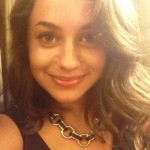 Express Yourself continues conversation on mental health through art