N****s at play: stories of the N-word and racism

A woman rolled down the tinted window of her silver car, stuck her head out of the window and yelled a single word: “Nigger.”

Joedian Roach had just bought lunch from the convenience store across from her Brampton high school when her best friend’s hand roughly slammed into her chest and violently heaved her back onto the sidewalk. She was about to step onto a narrow road that would lead her back to fourth-period English but a silver car was speeding right toward her. As she stumbled onto the edge of the pavement, readjusting her balance, the car slowed and the woman inside spat her slur.

“In that moment, my perfect little idea of Canada and my suburban lifestyle had been shattered,” says Roach, a 21-year-old hospitality and tourism management student at Ryerson. “I had been so naive all this time, thinking racism doesn’t exist because we live in such a diverse part of Canada and nobody would think to say such a word like that. In that moment, I was unhappily awakened to racism.”

That was four years ago but the moment has stayed with her. “You can’t erase where the word ‘nigger’ started from,” she says. “The word was a way to demean people and make them feel little. It was a way to marginalize them or make them feel not human.”

There are only 26 letters in the alphabet, yet people are able to arrange them into words of hate and disrespect. The N-word is one of those words. It’s the most dehumanizing word in history.

The N-word carries heavy historical weight. It derives from the Latin word “niger,” meaning black. However, throughout American history the word took on a derogatory connotation. “Negars” was a term first used by John Rolfe in 1619 when he recorded in his journal the first shipment of African slaves to Virginia. The word then stretched to “negroes,” primarily to dishonour African-Americans during the slave trade, and slowly seeped into every aspect of our culture, from literature and political debates to cartoons and music. In fact, the children’s rhyme, eeny-meeny-miney-mo was not always about catching a tiger by the toe. And by the 19th century, the N-word had already become a familiar insult.

Today, the word is trivialized and its stigma is downplayed. It has passed through generations like a cancer as people come up with new rules for its use. Change a letter or two and now the word “nigga” gains more acceptance in youth culture. It is casually peppered throughout song lyrics and standup comedy. On one hand, it is the ultimate degradation, but it has also become a popular term of endearment by those who seek to reclaim it, after their ancestors endured it.

“The N-word is like the word ‘bitch,’” Roach says. “That word is used colloquially so people can forget how hurtful it can be for others.”

Roach equates this push for reclamation to the new face of racism: a more polite, politically correct and well-mannered form of discrimination. However, at its core, this racism is still rooted in hatred.

“As long as we continue to tell ourselves that racism is a thing of the past and that we have ‘evolved’ to be more respectful and tolerant, hate will flourish,” she says.

“The N-word is like the word ‘bitch’ … people can forget how hurtful it can be for others.” — Joedian Roach

Tari Ngangura, director of public relations for the United Black Students at Ryerson, says she believes in turning the N-word into a word of power for black youth culture.

“I believe in reclamation,” Ngangura says. “I believe that ‘nigger’ is a word that no matter what generation of your family you are, it will always be a word that will affect you. So we should take it and rescue it.”

Ngangura says that only those who have suffered from it can reuse the word. People who haven’t had this word used against them have the privilege of not knowing how hurtful it can be.

“If you are non-black, white or brown, you can’t say ‘nigger’ or ‘nigga’ because it was never used against you in a manner to oppress you or degrade you,” Ngangura says.

Like Ngangura, Ryerson sociology professor Christopher Powell says the N-word is a label that can be adopted in a positive light, but only by the race of people who faced the oppression. This is where the heated argument of who can use the N-word arises, as black people can also use the word to dehumanize fellow black people.

“The word is not neutral,” Powell says. “It is either an expression of solidarity or a term of abuse and the meaning of a word depends on more than just the intentions of the person using it.

“It also depends on the context in which it is used and the relationship between the speaker and the listener. If a non-black person uses the N-word, they need to have established a relationship of solidarity with black people, or else the meaning they convey will, by default, revert to the abusive meaning.”

Powell says that reclaiming the N-word is an attempt to deprive it of its negative meaning and make the positive meaning more prominent than the negative one.

Andrea Nwabuike, a fourth-year psychology student, was only two years old when she was first called the N-word. Running around her neighbourhood park, Nwabuike ran from her mother on the wooden bench adjacent to the sandbox and asked other kids if they wanted to play with her. Yes after yes flooded her with joy, until on one occasion her question was met with immediate rejection: “No, you are a nigger,” a young boy said. “I don’t play with niggers.”

Since that day, Nwabuike says she hates the N-word and there is no difference in any way that it is used.

“A few letter changes (don’t) change the meaning. It is our chosen ignorance that has blinded us to this fact,” she says. “It’s like putting a bow on a cobra. The bow doesn’t make it any less dangerous.”

Nwabuike says both words still draw on the suffering and slavery that African-Americans endured in the 1600s. “Six letters have robbed black people of opportunities, hope and freedom. It fosters hate between people whether it is used throughout pop culture in music, films, or television,” she says. “We (need) to remind ourselves what the N-word means and why it was used in the first place. The N-word is spiteful, hateful and evil. It is not just a word.”

Sheldon Powell, a rap and hip-hop artist based in Toronto and part of rap duo The Foreigners, says the use of the N-word in music is a way for artists to express messages of poverty, abuse and their own frustrations within their communities. To him, it has become revolutionary.

“The N-word is a word of my generation,” Powell says. “The word has become second nature to use in music and is now coined as a term of endearment. I use it in my music for emotion, feeling, art and power.”

“Niggas in Paris,” a song that appeared on American rappers Jay-Z and Kanye West’s 2011 album Watch the Throne, is one of the songs Powell calls the most popular song from Western culture to feature the word “nigga.” Categorized with N.W.A’s Niggaz4Life or 2Pac’s Strictly 4 My N.I.G.G.A.Z. albums, which both stemmed from the 1992 Los Angeles riots and Rodney King hate crimes, the song magnifies racial transgression and racial progress. Jay-Z and West place black people high on the social ladder and a palace (“Paris”) but question the advancement of this position: “Ball so hard this shit weird. We ain’t even supposed to be here,” Jay-Z raps.

Along with music, there is no shock that the N-word has been seeping into film. The 2011 critically-acclaimed movie, Django Unchained used the word “nigger” more than 110 times and 42, the 2013 Jackie Robinson biopic, uses the word 46 times. Last year’s Academy Award winner for best picture, 12 Years a Slave, uses the N-word about 65 per cent less than Django.

“It’s like putting a bow on a cobra. The bow doesn’t make it any less dangerous.” — Andrea Nwabuike

Besides film, the N-word has even touched political platforms. Four-time Alabama governor George Wallace, who served non-consecutive terms between 1963 and 1987, sickened many black people with his liberal use of the word. In 1962, Wallace ran on a platform of racial segregation that was supported by the Ku Klux Klan. His inaugural speech infamously concluded with the closing lines, “Segregation now, segregation tomorrow, segregation forever.”

When Wallace won the election, he received further national exposure when he stood at the doors of the University of Alabama and did not allow two black students to enter. Vivian Malone and James Hood were refused the right to enrol in the university and Wallace continued to oppose black integration throughout his term. (Before his death in 1998, Wallace recanted his racist views and apologized to African-Americans.)

Rodney Diverlus, former president of the Ryerson Students’ Union, says this comes as no surprise. “I don’t think there is a black person in North America that hasn’t had the N-word used against them,” he says. “It has been used against me a number of times — walking down the street, coming out of clubs and at bars. It happens more frequently than I can point to … (a specific moment) popping out to me.”

So can a word like the N-word, which carries copious amounts of burden, ever be fully cleansed? None of the above dared to dream so big, though they all have said society is at a moment — culturally, socially and politically — in which we can address the factors that are within our control. Diverlus, for one, is cautiously optimistic that the word will continue to be used to heal the wounds that have been used to inflict real-life and lethal violence against black bodies.

“Psychology tells us that we as individuals can use the things that really hurt us and cause us trauma as one of the ways to recover,” Diverlus says. “I really believe in the politics of the process of reclamation by the community of the violence to take it and reuse it as a form of empowerment for themselves. But this will never change the fact that words have power.” 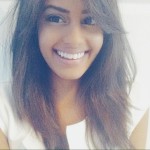 Ashani Jodha was the Features Editor for the Ryersonian. She also interned at Flare Magazine. When she is not writing or chasing breaking news, she is hooking up with Shane Oman in the projection room above the auditorium.

Ashani graduated from the Ryerson School of Journalism in 2015.

Ashani Jodha was the Features Editor for the Ryersonian. She also interned at Flare Magazine. When she is not writing or chasing breaking news, she is hooking up with Shane Oman in the projection room above the auditorium. Ashani graduated from the Ryerson School of Journalism in 2015.