Twenty police cars lined two blocks of Bay Street, their red and blue sirens flashing in sync with pulsating beats that invited crowds of people to dance on the street.

This dance scene was part of an art installation featured at Toronto’s 13th annual Nuit Blanche on Saturday night, where art projects were displayed across the city from sunset to sunrise. The exhibit, called On Flashing Lights, was created by Canadiancontemporary artist Brendan Fernandes,whose work has previously been featured at the Museum of Modern Art in New York City and The Getty Museum in Los Angeles.

On Flashing Lights, which was one of over 75 art installations featured at this year’s event, consisted of police cars parked side by side from the intersection of Bay and Richmond Streets to Adelaide Street, with a stage placed between them at the entrance of Temperance Street. Four DJs from queer, racialized, and immigrant communities took the stage at different times, performing between 7 p.m. and 12 a.m., including Bambii and Karsten Sollors. Through the combination of lights and music, Fernandes created an outdoor nightclub that moved people of all ages, races, ethnicities, and sexualities to dance.

Yet, Fernandes’s installation was more than just a dance party. The piece was designed so audiences could reflect on issues affecting queer, racialized, and immigrant communities, specifically safety and protection, said Fernandes.

The flashing sirens and police presence were meant to put into question the idea of a safe space for queer communities, a topic that Fernandes said he has heavily reflected on since the 2016 Orlando Pulse Nightclub shooting. Fernandes drew inspiration from this tragedy for his exhibit and had DJs observe a moment of silence every 49 minutes in memory of the shooting’s 49 victims.

DJ Karsten Sollors, the final musician to play, said he was happy to show his support for his community.

“The theme of it is anti-violence, and I haven’t directly been affected by what the theme is about, however, my community has,” said Sollors. “And so for me, it’s important to be here and to kind of give back, and to show respect to the deceased.”

The Pulse shooting, along with Fernandes’s’ own personal experiences with safety, led him to contemplate the people who make him feel secure and protected.

Fernandes’s uncertainty with police authority is especially relevant to Toronto’s LGBTQ community in light of the Bruce McArthur case.

Tension developed between Toronto police and members of the city’s Gay Village this year.The queer community said they believethe missing person reports, filed years ago on these victims, had not been properly investigated by police.

“I don’t live in Toronto, but I am a Torontonian, so I keep aware of what’s happening, because it’s still part of my community and so those incidents have definitely been affecting this piece,” said Fernandes.

Issues with safety and protection are ones that Toronto’s queer community has been trying to move forward with. The theme of this year’s Nuit Blanche was ‘You are Here,’ which aimed to place audiences at the centre of longstanding debates and conflicts that have challenged the city. The reflective nature of On Flashing Lights forces audiences to think of where the LGBTQ community stands, and attempts to move that community from ‘You are Here’ to their desired location of acceptance and safety within the city.

“‘You are Here’ speaks to a space of being visible, and I think we’re still trying to find within our set of rights, our visibility, our agency,” said Fernandes. “Moving forward is a question that I always pose in my choreographies, but through a political action, like how do we move forward? Let’s move out of this woke sense and find new possibilities for future beginnings, future imagined spaces.” 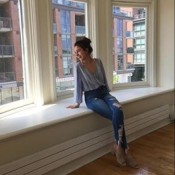