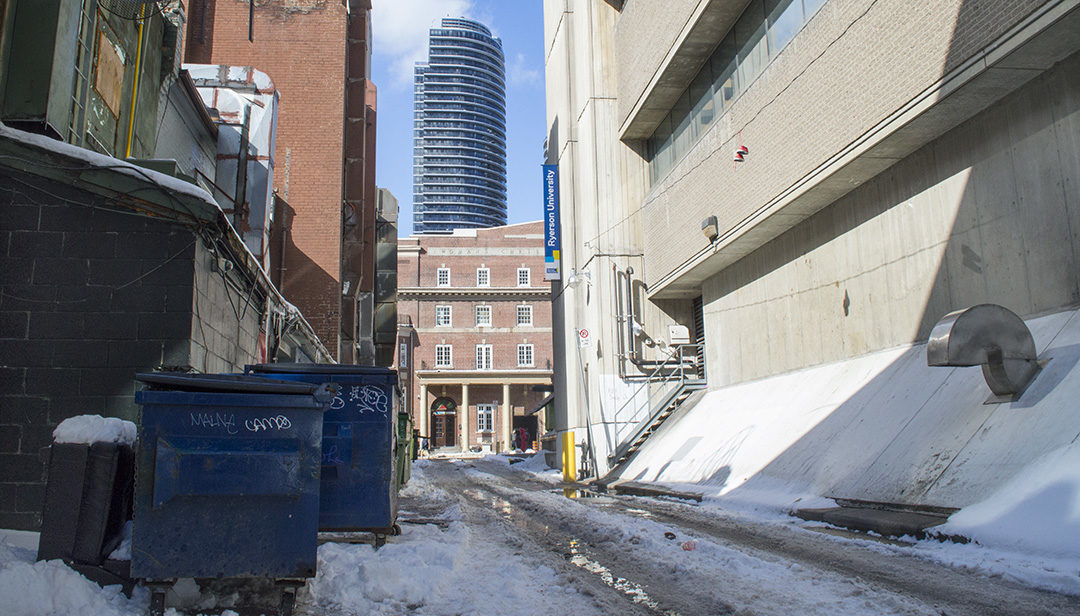 The O’Keefe Lane Revitalization project is an initiative to transform the campus walkway into a more inviting space. (Olivia McLeod/Ryersonian Staff)

O’Keefe Lane is tainted with tagged walls and overflowing dumpsters, but that will soon change.

On Monday, Ryerson announced the winners of the Reimagining O’Keefe Lane design competition. The contest was put forward as part of the O’Keefe Lane Revitalization project, an initiative to transform the campus walkway into a more inviting space.

“The best way to describe (O’Keefe Lane) is ‘under-utilized’” Uttley said. “It’s a dense part of the city … I think the garbage and the fact that when you’re there, you generally don’t feel safe, are the two biggest drawbacks.”

Multiplied Ground’s design combats these issues. It includes a communal waste area to partially hide large dumpsters, an increased amount of lighting for pedestrian safety and a floating courtyard to beautify the campus space.

“It’s such a tremendous opportunity to both, be fortunate enough to be going to Ryerson and to be able to do a design competition on something that can have such a large impact,” Oturkar said.

The team’s design was one of nine submissions that were judged by representatives from Ryerson, Covenant House and the Downtown Yonge Business Improvement Area , which are all partners in the revitalization project.

An open call last year asked students to send in their visions of a new-and-improved O’Keefe Lane. The narrow alley connects Gould and Gerrard streets, which are major paths on Ryerson’s campus. It doubles as a service route and a pedestrian walkway, yet the lane remains relatively unused.

“When you open (a competition) to students, the people who sign up are the people who are emotionally invested,” Oturkar said. “They really want to produce something valuable for this campus.”

Ryerson’s Faculty of Arts published all nine student submissions on its webpage. Multiplied Ground’s winning design is expected to go into development in the next few years and the team members have been invited to sit in on future meetings.

Confessions of a crazy cat lady

A nine-to-five day scares millennials away