The bill, which was put forward by Toronto Liberal MPP Cristina Martins, will now go to committee.

The Putting Your Best Foot Forward Act would be an amendment to the Occupational Health and Safety Act (OHSA).

Currently, the OHSA does have provisions on footwear protection for employees, but these provisions are limited to employees working in industrial and health-care workplaces. 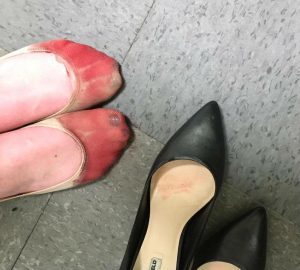 Nicola Gavins posted a photo of her friend’s bloody feet on Facebook after she was forced to work a shift in high heels at a chain restaurant in Edmonton in April 2017. (Courtesy Nicola Gavins, Facebook)

British Columbia banned mandatory heels in the workplace in April, which started the conversation in Martins’ office about the pressure of having to wear the fancy footwear while on the job.

“We thought that it was the appropriate time to bring this bill forward,” she said.

In March 2017, the Ontario Human Rights Commission released a report outlining the commitments made by some of Ontario’s most well-known restaurant chains to end discriminatory dress codes for their staff.

Katrina Henderson, a second-year fashion communication student, said she was required to wear heels when she used to work at retail store Mendocino’s. She also said she had to maintain her hair, nails and makeup. Henderson said her legs would start to hurt after five hours on her feet.

“I was just in pain during my shift, it wasn’t fun by the end,” she said.

Sadie Snip, another fashion student who used to work as a restaurant hostess, said that while she wasn’t made to wear heels, she was still required to wear “tight black T-shirts” and above-the-knee skirts that cost around $85 as part of her work dress code. However, Snip said her male colleagues wore black jeans and black T-shirts.

She acknowledged that the restaurant didn’t allow employees to wear heels due to safety concerns.

“We had to have non-slip shoes with a sole that doesn’t slip on food and oil,” she said.

Ryerson sociology professor Jean Golden said that the bill is not only important for the health and safety of workers, but it could also end hypersexualization of the female body.

“If men want to eat and drink, they’re going to come and eat drink and women prancing around in a sexualized fashion should not be the determining factor,” Golden said. “The ban shouldn’t be taken to restrict a woman’s choice on how they wish to dress at their respective jobs.”

The decision to wear heels to work should be a choice for the employee, Henderson said.

“I don’t think it should be enforced,” she said. “People have back problems … certain mental health issues that maybe wearing a heel will affect in a way where they will get even more sick.”

EDITORIAL: A yes is not sufficient for equity vote