Opinion: All NBA eyes on the North 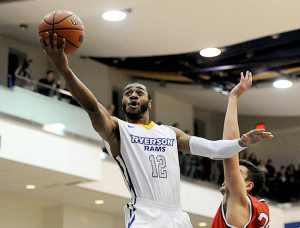 Toronto has always been viewed as a hockey city. But every once in a while, another sport captures the attention of the fan base. Like the Blue Jays last summer, the Toronto Raptors are on the rise. But in recent years, no sport has had the growth and impact that Toronto basketball has had.

When the Toronto Raptors were established in 1994, there was not a lot of interest from NBA talent. According to Dave Mendonca’s book 100 Things Raptors Fans Should Know & Do Before They Die, the cold weather, higher taxes and lack of glamour weren’t worth it to a lot of players early on. But that’s because no one knew what a Canadian basketball franchise had to offer.

Over time, with contributions from household names such as Vince Carter, Tracy McGrady and Chris Bosh, the franchise would be put on the NBA map. The fans in Toronto gained a reputation as some of the most passionate in the league.

However, something was missing. With some heartbreaking departures and crushing defeats in the playoffs, Toronto was in need of a spark.

After trading for guard Kyle Lowry and hiring former executive of the year Masai Ujiri as general manager, the team returned to the playoffs in 2013-14 after a six-year absence. Longtime grinder

DeMar DeRozan blossomed into an all-star and he and Lowry have become a dominant duo. At the same time, Ryerson week-of-welcome hero Drake was named the Raptors’ global ambassador and the “We The North” campaign took over the 416.

This was huge for the Toronto basketball community. The Raptors were no longer playing in a forgotten Canadian city. They were The North.

This weekend we will host the first NBA all-star game outside of the United States in the event’s 65-year history. Toronto will be on the global stage and the Ryerson Rams get to partake in the historic event. The Mattamy Athletic Centre will host the Jordan Brand Classic, featuring the best high school teams in the U.S. and Canada, on Thursday and the Basketball Without Borders Camp on Friday.

On Feb. 14, the Rams will take on cross-city rival U of T Varsity Blues at the Enercare Centre. How could it get any better for the Rams men’s basketball team? The men are the first Ryerson team in any sport to be No. 1 in the nation and are on an eight-game winning streak in the early weeks of 2016.

It’s fitting that Ryerson’s rise to the top of Canadian basketball comes at the same time the world turns its eyes towards Toronto.

The Ryerson players will be able to cherish this memory forever. An opportunity to be involved in a weekend with the best players in the world.
NBA all-stars, welcome to The North.