VOICES: An open letter to Hollywood

I wanted to introduce myself, in case you weren’t sure what a genuine Asian person looks like. Surprise! I’m a far cry from Scarlett Johansson.

But you knew that, didn’t you? You must have, since the Internet explodes every time you even consider casting a white actor as a character of colour. How else do you explain the preemptive petitions to keep Mulan’s character Asian in Disney’s new live-action remake, or the livid fans who hijacked Ghost in the Shell’s viral marketing campaign? Surely, this isn’t going unnoticed.

And yet, there was Scarlett trying to convince us she was Japanese. There was Tilda Swinton taking the role of an originally Tibetan monk in Doctor Strange. If, by some magic chance, this is the first time you’re hearing this outrage, Hollywood, allow me to shout over the Twitter hashtags: Whitewashing is not OK.

If the character isn’t white, then the actor playing the role shouldn’t be either.

It’s a simple notion that many have no trouble understanding. Actor Ed Skrein (Deadpool, Game of Thrones) made headlines late August for stepping down from his role in the upcoming Hellboy movie after learning his character was originally Japanese.

Many, myself included, hoped this would be – and still could be – a wake-up call for you, Hollywood. People of colour need to be able to tell their own stories and diverse audiences need to be able to see themselves reflected on-screen. You’ve revolutionized the way movies are filmed, produced and distributed, so why does it seem like your casting decisions are stuck in the 20th century?

Do you know how much it means to a kid to see a face that mirrors their own?

Earlier this month, #FirstTimeISawMe trended on Twitter as part of a Netflix marketing campaign. Users, including yours truly, shared stories and reactions to seeing a character that looked like them on-screen for the first time.

When I was 3-years-old, I watched a young girl with straight, black hair take her father’s place in the army and ultimately save China. She had eyes like mine. Her hair was parted the same way. She had the same restless nature that I felt stirring in my toddler-self. When people told me, even jokingly, that I looked like Mulan, I felt absurdly proud.

That’s what representation does.

That same pride can be found in kids who see Bodhi Rook (played by Riz Ahmed) fight the Empire in Rogue One: A Star Wars Story, or Trini (played by singer Becky G) take on a supervillain in Power Rangers. It’s one thing to have a role model to look up to as a kid, fictional or not. It’s another thing entirely to see a face, hear a voice, or see a culture that feels familiar.

There’s no shortage of aspiring directors, writers and actors of colour waiting and willing to tell their stories. But when you cast Christian Bale as Moses or, more recently, Zach McGowan as Hawaiian-born Benehakaka “Ben” Kanahele in the upcoming World War II film, Ni’ihau, you strip away the opportunity for diverse voices to reach their audience.

Have you noticed, Hollywood? Your seemingly clever ways to downplay whitewashing as drummed-up controversy aren’t working. If none of the above mean anything to you, allow me to direct your attention to two things I know you care about: ratings and box office numbers. 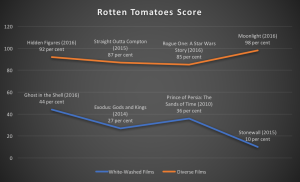 In two ways, you can see how films led by people of colour or consisting of a diverse cast fare better against ones with notable whitewashing: domestic total gross and Rotten Tomatoes ratings. 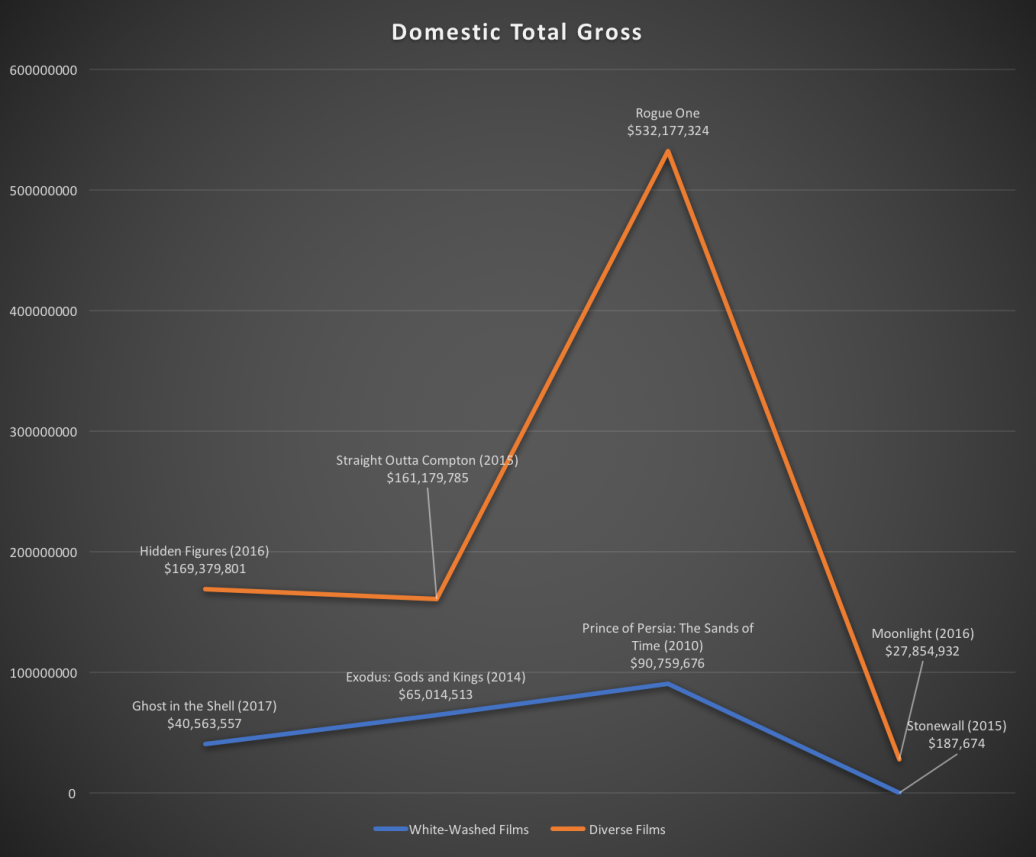 So, what will get through to you? An actor has already stepped down from a role that shouldn’t have gone to him in the first place. Will your wake-up call be the failure of whitewashed movies in theatres? Audiences know what they like and no amount of reboots and multi-movie franchises will make up for the lack of diversity on-screen.

It’s your move, Hollywood. Last year, amidst the #OscarsSoWhite buzz, Idris Elba noted that television’s diversity was on the rise as he picked up the second of his two Screen Actors Guild awards. Shows like Master of None, Atlanta and Kim’s Convenience are drawing more and more viewers. With the worst summer box office numbers in more than 10 years, I’d start grasping for any way to bring audiences back through those theatre doors.

But that’s just me.

I hope you guys have a plan.