It was stated very bluntly. I had brown hair, I lived with my mother, and I had daddy issues.

I hear the phrase all the time.

It’s a snide remark in a hallway or a pathway to sexual conquest on a sitcom.

I recall a man from my university once saying he only dates younger women who thought he was their “daddy.”

It didn’t take long to learn “daddy issues,” is a sexist term used to demean women who seek validation from men because they did not receive any validation from their own fathers. 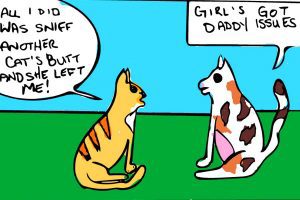 It seems like a way to make light of the fact that a woman has been so emotionally hurt by her father as a child that it negatively impacts her actions and relationships as an adult.

“Daddy issues” is a misogynistic way to talk about being hurt. People should consider how it’s  blaming women for the way their fathers behaved.

Much like “easy,” “daddy issues” reduces women to what men have done to them. It belittles and, in some cases, actively mocks the negative things that have happened in women’s lives. Being strong and above hurtful language shouldn’t be a prerequisite for being a woman.

Women have a right to be angry when something like having a loveless parent is a joke and not cause for sympathy.

It seems almost ridiculous to say in 2017, but these sexist and demeaning terms need to be a thing of the past.

Sexist language, like any hateful language, is a tool to decrease the value of the people it’s aimed at. It’s not fair to anyone to force people into a stereotype based on how we choose to live our lives.

To say someone has “daddy issues,” is another way to try and not take women seriously.

It’s also just demeaning and hurtful to the person it’s aimed at.

It’s a term that appears to be more normalized, and is more widely accepted.

It may be because it is hidden as a joke; it’s often laughed about. It doesn’t really matter if it has been normalized, though. It still hurts.

Hurtful language does the same amount of damage no matter how common, and it needs to stop. It benefits everyone when sexist insults stop.

It benefits everyone when women don’t have to hear derogatory jokes about themselves and the uglier parts of their upbringing so casually and callously dropped.