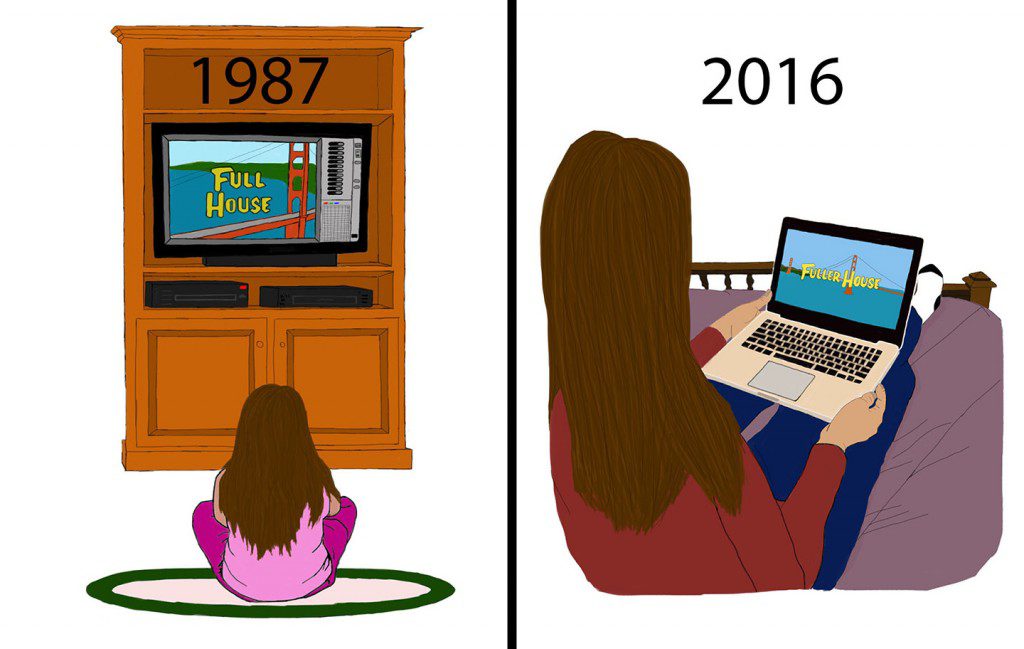 Let me lay out a scene for you. It’s Saturday morning, you’re in the middle of the scratchy living room rug, watching your favourite sitcom, and eating the biggest bowl of fruit loops your mom would let you have. You’re sitting way too close to the TV and you’re about to get in trouble for it, but you don’t care. This is your happy place.

Now what if I told this seven-year-old version of yourself that one day they’d be able to watch new episodes of that same show, with commercial-free seasons streamed right to your computer? Dream come true, right? Well … maybe.

The better part of the last 30 years of cinema has been littered with remakes and reboots of franchises. Advertisers, journalists, clothing companies, movie executives and now TV network officials are all in on the same not-so-secret secret: nostalgia sells.   This is the great conflict of the current TV reboot boom. These shows are being marketed to millennials, a generation obsessed with nostalgia.

Networks are using the guarantee of an audience as a primary reason to produce entertainment. But at what point does nostalgia stop being a fun walk down memory lane and start being an empty, strategic marketing tool by which to manipulate viewers into buying, listening and, in this case, watching?

Millennials were raised in a world of relative comfort and economic boom during the late ’80s to the very early 2000s. Gone were the days of the Cold War, political assassinations and violent counterculture.

It was a time that is now looked back on with a soft-focus lens, especially by those who grew up in it. Now in their early 20s to mid-30s, millennials are old enough to reminisce about this era and feel as though it was a long time ago.

However, the ’90s certainly still had its fair share of struggle and strife in a global perspective. But when examined historically, it becomes apparent that as a decade it is bookended by two crucial parallels: war and recession.

In 1991 the Cold War ended and another wave of North American economic boom began. In 2001 a recession hit Europe and the United States and 9/11 shook North American life as we knew it.

Growing up in this relatively peaceful 10-year limbo, then entering a millennium of conflict and failing economies, stripped this generation of an innocence that they feel these shows can give back to them.

But can a show streamed on Netflix really help that much? So far it is hard to tell. The notion of revived shows is relatively new and doing it through streaming services is a game-changer. They are bringing our beloved characters up to date, showing how they have grown, just as we have.

The same way talking to an old friend can connect us to an earlier version of ourselves, we are, in a way, relying on these reboots to bring us back not only to a past time, but to our past selves.

Fuller House is exactly how you expect it to be. Every minute of the first episode is a whirlwind of catching up on story lines, slipping in old catchphrases, introducing new characters and explaining why some old ones aren’t around (*cough*Olsen twins*cough*).

From there it basically tries to mirror the same dynamic it once had, except this time the little girls who were being raised are doing the raising. The acting is just as forced and the jokes still cheesy, and although I know the show was only made because there was a commercial market for it, I enjoyed every minute.

RyersonianTV: March 2, 2016 – Rally and March on campus for women’s rights, Provincial Budget followup, and High School Musical is Back