OPINION: Ryerson needs a Faculty of Armed Bank Robbery for the thieves of tomorrow

What could Ryerson do better? Don’t answer that, it’s rhetorical and I don’t care about your opinion. The answer is that Ryerson needs to enhance our bank robbery program.

“But we don’t have a bank robbery program,” you might say. Well, that’s the problem. Ryerson’s exclusionist approach to bank robbery education forces aspiring criminals to enrol in programs that woefully under-prepare them for the realities of the industry, dooming them to failure. 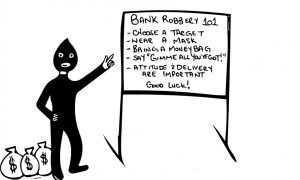 Illustration by Brooke TaylorTake Steve Vogelsang, once a student in the Radio and Television Arts (RTA) program here at Ryerson. At 53, his esteemed career took a sharp downturn when he was charged with robbing two banks. Video footage shows a flannel-clad man armed only with a sad, doughy face and a handwritten note.

The sum of stolen cash remains undisclosed, but it’s doubtlessly trivial. According to the National Post, a former colleague viewed Vogelsang’s alleged, underwhelming robberies as more a cry for help than a confident career step. If bank robbery is a cry for help, where is Ryerson’s response?

Now, more than ever, Ryerson needs to answer this call to action and reimagine one of its RTA programs as the FABR (Faculty of Armed Bank Robbery). Canada has long-suffered a dearth of notable bank robbers, and Vogelsang’s alleged actions are the wakeup call we so desperately need.

Look at our legacy. On Wikipedia, Canada’s list of notable bank robbers names 17 people and organizations, one of whom is named Kevin. Really? “Kevin” is one of our most notable bank robbers? Compare that to the inspiring and storied list of nearly 200 notable bank robbers in the U.S., including such illustrious names as Machine Gun Kelly, Al Brady, John Dillinger, Baby Face Nelson, Bonnie and Clyde, and Butch Cassidy and the Sundance Kid.

How many of our bank robbers favoured the Thompson submachine gun, or escaped to Argentina with a cohort of armed lawmen in tow? None, to my (possibly limited) knowledge. That’s a symptom of a miscarriage of academia.

I see only two acceptable types of bank robbers: the prohibition-era paradigm requires that one must be a notorious villain who retires involuntarily in an armed showdown with the law. Alternatively, the more contemporary approach is to exist as a nameless, faceless presence – an evasive spectre that haunts the dreams of the FBI (à la The Thomas Crown Affair).

And we in Canada have Kevin. Kevin was a Bay Street financier who robbed banks during his lunch hour, then peacefully turned himself over to the police after he was called out in an email. Good stuff, Kevin.

Ryerson needs to do something to raise the bar. The struggles of recent grads in the current job market are well documented, yet we refuse to provide our students with the tools they need. Instead of waiting for another failed robber to waste so much of his life in the pursuit of unrelated fields, like finance, Ryerson needs to offer its students the education that will enable them to realize their full potential.