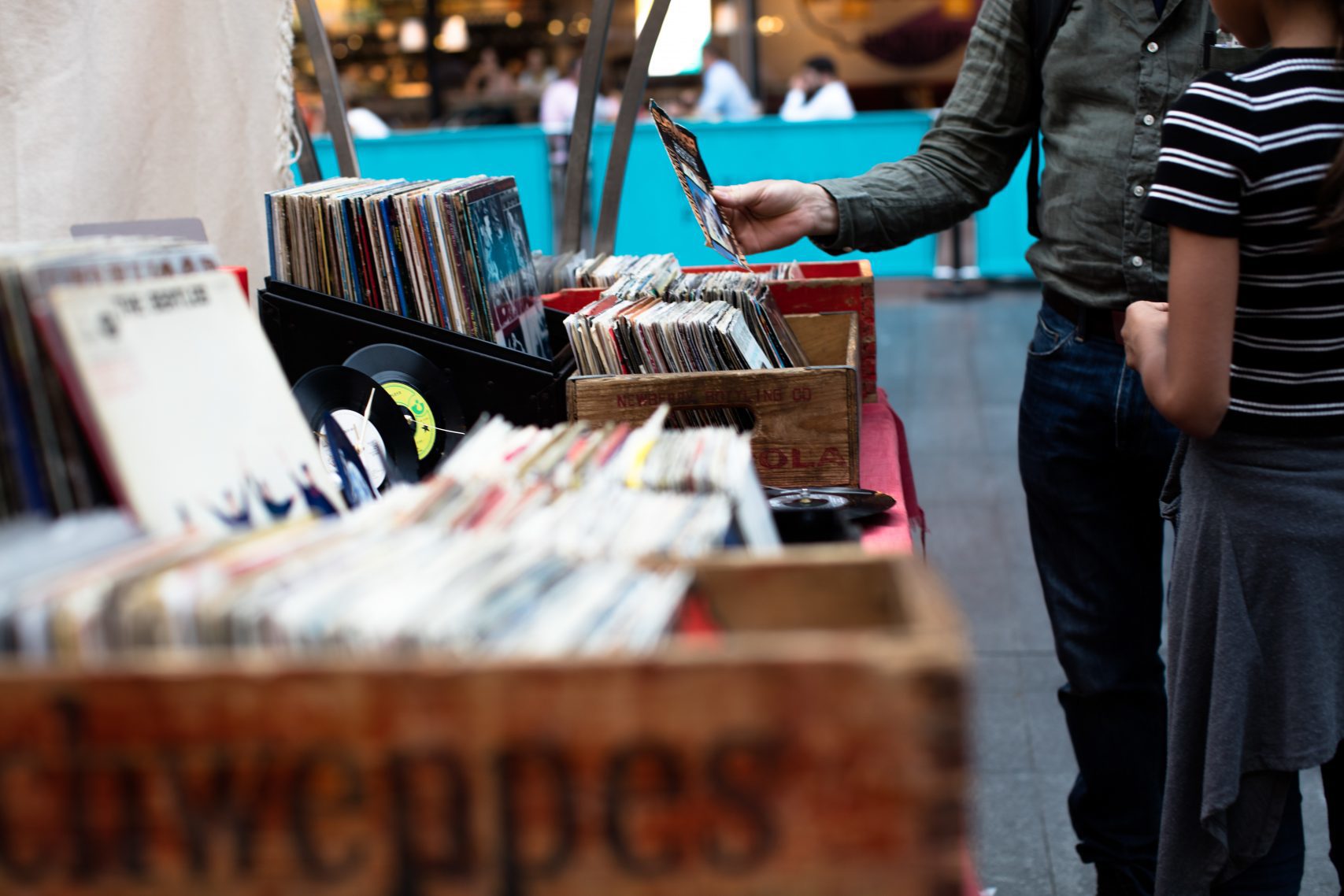 If you’re in your twenties like me, the year you were born is officially retro.

Recently, Netflix released a show called Everything Sucks! which has been called the Stranger Things for ‘90s kids. It’s about a small Oregon high school’s A/V and drama club banding together to make a movie.

According to critics, though, the show is less focused on its plot and more on its appreciation for the 1996 Walkman-listening, Tamagotchi-playing and paper-fortune-telling, coming of age aesthetic.

Today in North American television, networks are hooking young viewers by giving back what they once loved.

We’re fished with content like Everything Sucks! that depends far too much on its setting and, as Vox’s Caroline Framke reasons, is “strategically designed to make nostalgic millennials fall in love with it.”

And we seem to take the bate every single time.

While our generation surely isn’t the first to romanticize their past, we’re doing so sooner and more intensely than any cohort previous. Think about it: we’re up to our ears in ‘00s reboots of Gilmore Girls, and That’s So Raven.

Nostalgia has become our coping mechanism; the painkiller we take to numb the prospect of our dumpster fire futures. In this sense, thinking back to when times were simpler and finding relief in the mind of a reliant, coddled prepubescent former self—if only in the 40 minutes it takes to watch a dramedy set in your childhood years—is much more hopeful than looking ahead.

Having come into adulthood after the Great Recession, millennials don’t subscribe to the “Work hard, go to college and you will have a successful life” ideology.

We’re Generation Jobless: over-educated yet unemployed grads drowning in student loan debt and struggling to find footing in an increasingly globalized and automated workforce. In Canada, the 15 percent youth unemployment rate doubles that of the general population. In the broken economy we inherited, making the move towards milestones like homeownership, marriage and parenthood at the young age our moms and dads did is nearly impossible. 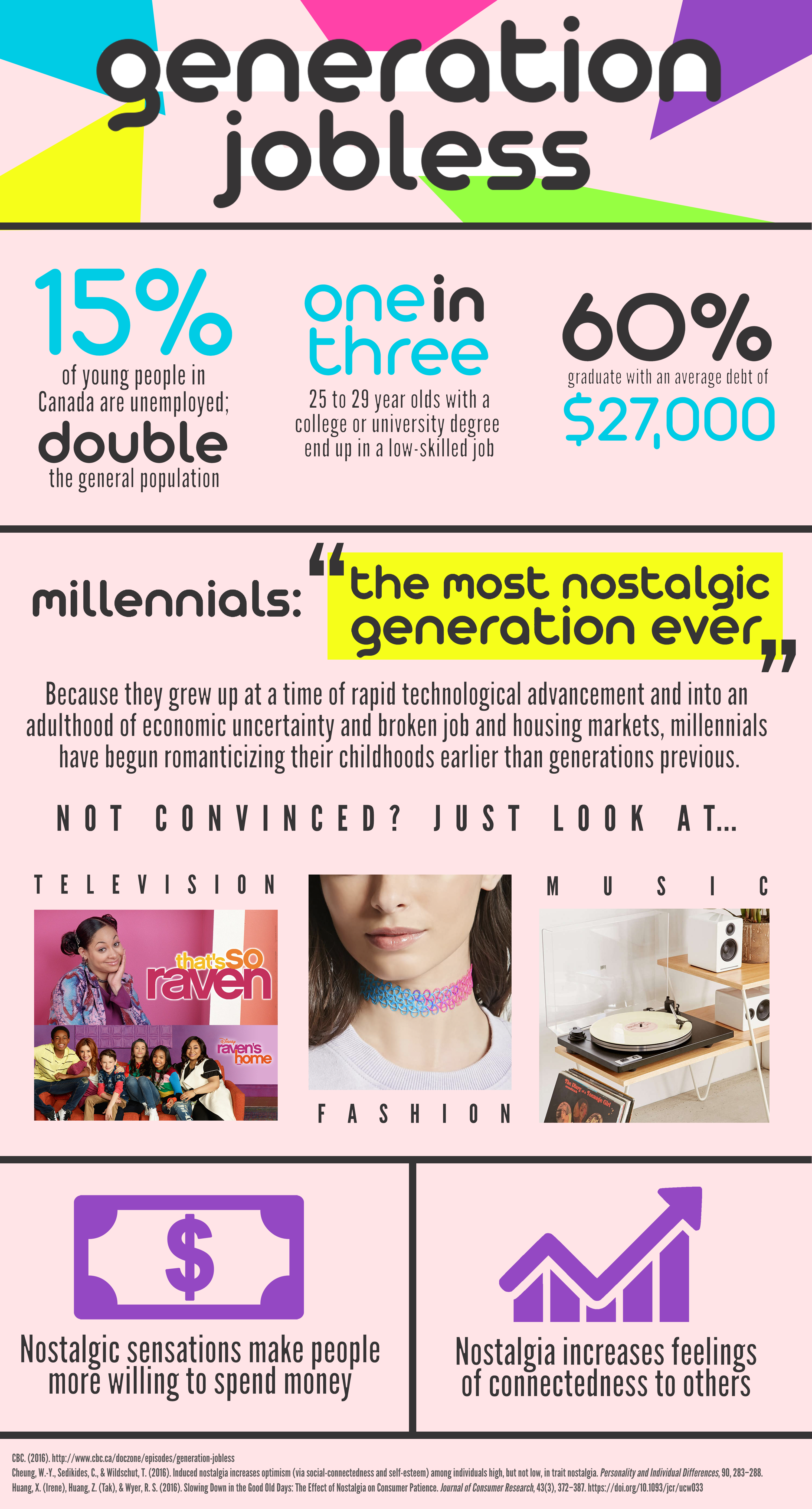 There is in fact a good and bad nostalgia: reflective and restorative. The one we choose to embrace, experts say, can make or break our mental wellbeing. Reflective nostalgia is healthy and makes you happy. It allows you to appreciate a memory and the warm, fuzzy feelings it brings with it, while always acknowledging and accepting that the past is past.

Restorative nostalgia, on the other hand, can be harmful because it makes you sad and overly wistful. It focuses on longing and a fierce desire to “rebuild a lost home.”
With Everything Sucks!-type programs encouraging that homesickness for the past, many of us are hung up on the bad, restorative one that tells us to write off our futures before we get there.

According to the Association for Consumer Research, nostalgia is “a screen memory—not a true recreation of the past, but rather a combination of many different memories…integrated together,” in which “all negative emotions are filtered out.” In other words, explains Swinburne University media and communications lecturer Jessica Balanzategui, we long for an “overly sentimental re-imagining of the past.”

What you are trying to restore never truly existed. While the thought of tomorrow might be bleak, yesterday wasn’t actually as great as you remember it to be.

We almost always recall our ‘good old days’ out of context. As argues Vanity Fair’s James Wolcott, “unscrewing [a] time capsule is opening a can of worms.” It should be noted that nostalgia is widely considered a white people’s leisure because, for most minority groups, the not so olden days are a somber flashback. While life may have been more enjoyable for 7-year-old you in 2005, the world was certainly no better of a place back then.

Boy Meets World ended 18 years ago, for instance, and has since been criticized for casual sexism and homophobia in its writing. Perhaps reflective of a Western society where same-sex marriage was not legal in all states and “feminism” was far removed from the everyday vernacular, the equivalent humor would and could never exist in its Girl Meets World derivative. When watching a dated series with modern eyes, it often becomes apparent—through normalized misogynistic tropes, anti-gay punch lines and token casting—that times have changed following its last episode.

It’s really hard not to be nostalgic in 2018, though. As digital natives, today’s twenty somethings are the first to have their lives fully and immediately catalogued online. On social media, nostalgia does not rely on individual or specific memory. Instead, it is relentlessly triggered and nurtured by easy access to an infinitely shareable past.

We get our fix when we #TweetLikeThe00s or take in conspiracy theories about Caillou growing up to be Saitama. There are, in fact, entire virtual communities dedicated to keeping generational pop culture alive. The blog everything2000s.tumblr.com, for example, brings together tens of thousands of adults who are looking forward to Incredibles 2 more than any modern-day child. “I [regularly receive] messages from people thanking me for bringing them back to that time in their lives,” 20-year-old Virginia Kettles, the site’s founder, told me. The way we cultivate nostalgia on social media, insists Balanzategui, can “confuse the boundaries between our own individual memories and the internet ‘hive-mind’ of our online communities.” Many of us are even nostalgic for moments we didn’t actually live through. (Who else missed the bike-riding, arcade-going ways of the ‘80s after watching Stranger Things despite not having existed then?)

If anything, nostalgia programming—like a #ThrowbackThursday or SpongeBob SquarePants meme—comforts and unites the millennial population in affirming our childhood has roots and continuity. There is satisfaction in knowing the beloved trends, songs and characters we grew up with go on, but disappointment in understanding they no longer exist for us.

We all, regardless of the year we were born, yearn to be kids again sometimes. Generation Jobless just wishes the hardest. Wanting to rewind away from debt and dead end work is justifiable, but that’s not to say adulthood won’t bring with it beautifully wonderful experiences too.

It’s total self-sabotage to compare the fantasy of your past to the reality of your present or promise of your future.

You owe it to yourself (current and former) to keep the faith.