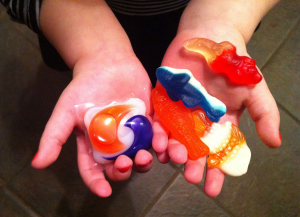 Let’s forget for a second that cigarettes and drugs are dangerous, and let’s focus on the colorful candy-like killer that is no longer just a threat to children: Tide pods.

The first time I saw the headline on Twitter, “Don’t Eat Tide Pods,” I thought to myself, “this has to be a joke.” This was just clickbait, it had to be. People weren’t seriously eating detergent packs, right?

Well, I was dead wrong.

And that was a scary realization: that young adults were eating these household items made from over a dozen chemicals, including: propylene glycol (found in paint), sodium hydroxide (found in explosives), ethanol (found in insect repellent), citric acid (found in toilet cleaners), and the dye Liquitint Blue (found in antifreeze). Now who wants to pop a Tide pod in their mouth?

That’s just insane! Or am I the only one who thinks that?

The trend of consuming laundry pods has resulted in “The Tide Pod Challenge.” People all over the world are filming themselves biting into a Tide pod or turning it into a cooked meal, then eating it to see the explosion of colors once the package is bitten into. It is a sweeping sensation among millennials.

In the first half of January, poison control centers have handled 39 cases in which teenagers and young adults were intentionally exposed to these packs. According to the American Association of Poison Control Centers, there was a total of 53 cases of the same nature last year.

I kept waiting for the punchline. The “got ya” moment where someone would speak up and say it was all a prank… I’m still waiting.

A video posted by Smosh came across my Facebook feed. Just watch it and you’ll understand the use of satire to de-satirize a joke gone too far.

Yeah…enough said. But is it though?

Ingesting these pods along with the liquid inside can cause nausea, vomiting, coughing, choking, breathing difficulties, stomach pains, rashes, organ failures, and death.

It is dangerous, easily avoidable, and elementary. Elementary in the respect that even primary-grade students understand that you should never eat laundry pods because they could, you know, kill you.

Is it really worth putting your life at risk for the world to see your stupidity? I think there’s a vanity to this phenomenon whereby you feel validated and invincible if you succeed in this task.

But when a Tide spokesperson has to take on the social media sphere to deliver such a given truth, things are super bad. Here’s an explanation of why you shouldn’t do it from NFL tight end Rob Gronkowski.

My first question was: “how did this start?”

How messed up would you have to be to think of something so life-threatening? As it turns out, The Onion (an American satirical website) printed a story in 2015 about how the red and blue detergent pods looked like sweets, and after a few social media guinea pigs experimented with the idea, the creation of a single meme was generated and today’s biggest trend was born.

Some retailers across North America are pulling Tide pods from their shelves as a recourse. But realistically, they shouldn’t have to be going to this extent.

How did one sick joke get this far? We let it progress, that’s how. We all cheered for those people with simple thoughts and braved their ways through the challenge. We “liked” them on social media, and we encouraged the overall idea to grow through retweets and shares, just for the shock value.

But only now, we are realizing that maybe, just maybe, this isn’t the best idea. And unfortunately, we may be too late to help those who are in over their heads—who have hopped on the bandwagon—and given in to what, despite any other judgment, is dumb. So much for washing your mouth out with soap for bad behaviour—that seems to have lost its meaning now.

So the moral of the story is: don’t eat Tide pods. Just don’t.

Hi Amanda! Good job on the article! Tide pods are indeed a problematic trend for kids these days! Keep up the good work!