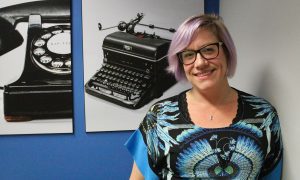 It’s 2017 and we still can’t get it right. A recent column in the National Post was headlined, “Women’s prison left to cope after getting male inmate who identifies as female.”

What exactly is wrong with this headline? Everything.

“This is as bad as it gets. I have seen worse but in 2017 this is not what we should be seeing in a Toronto national newspaper,” said Andrea Houston, a Toronto-based journalist and Ryerson professor. Houston developed and teaches the course Queer Media, taught for the first time last year and offered by the Ryerson School of Journalism.

“We shouldn’t be feeling sorry for prisons,” Houston said.

She sees the media slowly getting better with the representation of trans persons and genderqueer issues in the media, but only in the last 10 years.

Bill 33 in the Ontario Human Rights Code, also known as Toby’s Act, gives people “the right to be free from discrimination and harassment because of gender identity or gender expression.”

Just last year, Bill C-16 passed as an amendment to the Canadian Human Rights Code and Criminal Code adding “gender identity and gender expressions” to the list of protected grounds.

Houston said the biggest mistake she sees by journalists is using the word “transgendered.”

“Linguistically it is just wrong. We don’t call gays, gayed.”

The biggest issue she sees with the National Post column by Blatchford is the point the paper is making by not using the word trans or transgender to describe the person she is writing about.

“We are talking about real human lives; this is not a metaphorical ideology.”

“Maybe they don’t need to cover any trans issues but be the voice and resident expert in the newsroom,” she said. “However, why can’t we have trans people writing about education, city hall and health care for example, and not just trans-related stories?”

Canadian journalists all follow The Canadian Press Style Guide, and the guide says that gender identity refers to the individual’s own personal sense of their gender, which may not match their assigned gender at birth. It mentions to avoid using the word trans without defining it’s meaning in the copy, and queer, because it could be construed as offensive by some people.

Whenever possible, the style guide states you must confirm with the person how they wish to be described in print. The National Post did not follow these rules because if Blatchford did, she would have used the correct identity of the trans woman and not have identified her as male.

Harlick is a two spirit, non-binary, trans masculine person who goes by the pronoun they or them.

They found journalists often publish the wrong pronoun or avoid any pronouns in general.

“More times than not they don’t ask and when they do ask, they are always confused when I say anything other than she,” Harlick said. “So many times I’ve told folks my pronoun and then they either don’t use the correct pronouns in the story or use no pronouns at all, which misgenders me in the article anyway.”

Harlick said journalists should always ask what pronouns trans persons prefer, but in a way that allows them to feel comfortable and not awkward. They recommend that when introducing yourself, always mention the pronouns you, the journalist prefer and what they, the interviewee prefer.

“That way you aren’t expecting a trans person to disclose to you without you disclosing to them.”

In some cases the general public is portrayed as helpless in the fight to better trans lives in our society.

“In reality, the trans community deals with awful conditions of poverty and suicide because our society sets them up to fail,” Houston said.

Journalists can get fixated on writing stories that are different and shocking because that’s what entices readers. When they do report on trans and genderqueer issues, they make the community out to be an anomaly in society.

“I think that the media doesn’t often report on barriers that affect trans people,” said Marty Fink, a professional communication professor at Ryerson.

Fink is genderqueer, non-binary and prefers the pronoun they because neither ‘she’ nor ‘he’ accurately reflects Marty’s gender.

Fink argues that until the media starts to focus on these issues and holds institutions responsible, nothing will ever change.

“Fighting these systems is essential for journalists if journalists hope to support or even to accurately represent trans people.”