BREAKING NEWS
Ryerson science departments give medical supplies to Toronto hospitals fighting COVID-19
Toronto’s global climate strike moves online
A diary: what it was like leaving residence due to COVID-19
How to study at home for exams
Student groups are taking out the social from social distancing
Opinion 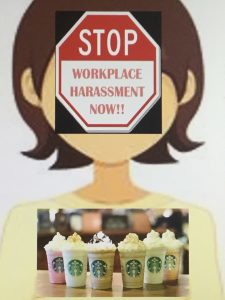 There are moments when I am truly grateful for the #MeToo movement. As a young female student just starting to get a taste of the real world, I am glad to see that women are one step closer to equality in the world.

But on the other hand, it scares me because casting light on the truth leaves a dim and misty shadow—one that tells tales of abuse, harassment and mistreatment of women in their everyday lives: at home, at school and at work.

After reading the tales of these young women who faced sexual harassment at the place I frequent for a $5 vanilla bean crème Frappuccino, I was instantly sickened.

According to the Occupational Health and Safety Act, workplace harassment is defined as engaging in a course of vexatious comment or conduct against a worker in a workplace that is known or ought reasonably to be known to be unwelcome. This definition is not just limited to co-workers and bosses—this includes customers who interact with employees.

This is a common problem throughout the world. Anecdotes of employees being sexually harassed are not rare. These stories vary from cases of being uncomfortably gazed upon, to receiving inappropriate sexual comments and even cases of being groped without consent.

My question on this topic is: What gives men the idea that they can do these things to women? They have absolutely no right to verbally or physically threaten women. They should be punished for those actions—but it seems they’re not.

In response to Cosmopolitan’s allegations, a Starbucks representative recently stated that, “harassment has no place in our stores.” And that made me wonder what the bosses of these employees are doing to solve this problem. The answer seems to be nothing.

In the same article, former Starbucks employees say they reached out to their employers asking to ban customers who were harassing them in the workplace. One woman’s boss replied that, “It takes strenuous paperwork to ban someone,” and in another case, a barista was told, “The customer spends a lot of money here.”

Well here’s my response to that: Goodbye Frappuccinos.

After reading the stories and hearing the blatant disregard for rights in the workplace, especially for women, I am furious. I can’t support a company whose workplace environment is toxic and not looking to act upon it.

Don’t get me wrong: Starbucks is not the only culprit. Ask anyone who has worked in the hospitality business and they will likely say that they too have been harassed before. It is clearly a systemic problem that must be eradicated, and the solution starts with speaking out.

If you see harassment first-hand, don’t stand idle. Do something about it. Intervene if you can, or get someone else to. And if that’s too dangerous, call the police then report it to the company’s human resources department.

The bottom line is that this has to stop. This egregious behaviour and these unacceptable attitudes need to change. They have to. Together, we must push forward for a positive change.

Join the #MeToo movement if you agree.