People are buying music again — so why is HMV Canada closing?

HMV Canada will be closing their stores for good this spring but it’s not because people aren’t buying music.

Steven Ehrlick, former vice-president of business affairs for EMI and an assistant RTA professor, thinks that people are buying more music than in years past — just not in the way HMV would have hoped.

“Young people, middle-age people, all people, but especially young people, aren’t interested in owning physical copies of their music,” said Ehrlick. “This old trope of ‘we want to own something’ has gone away.”

Services like Spotify and Apple Music have continued to gain paying subscribers in 2016, reaching 40 million and 20 million, respectively.

Nick Williams, CEO of HMV Canada, blamed the store’s loss in revenue, which has largely decreased in the last two years, on young audiences not buying music. 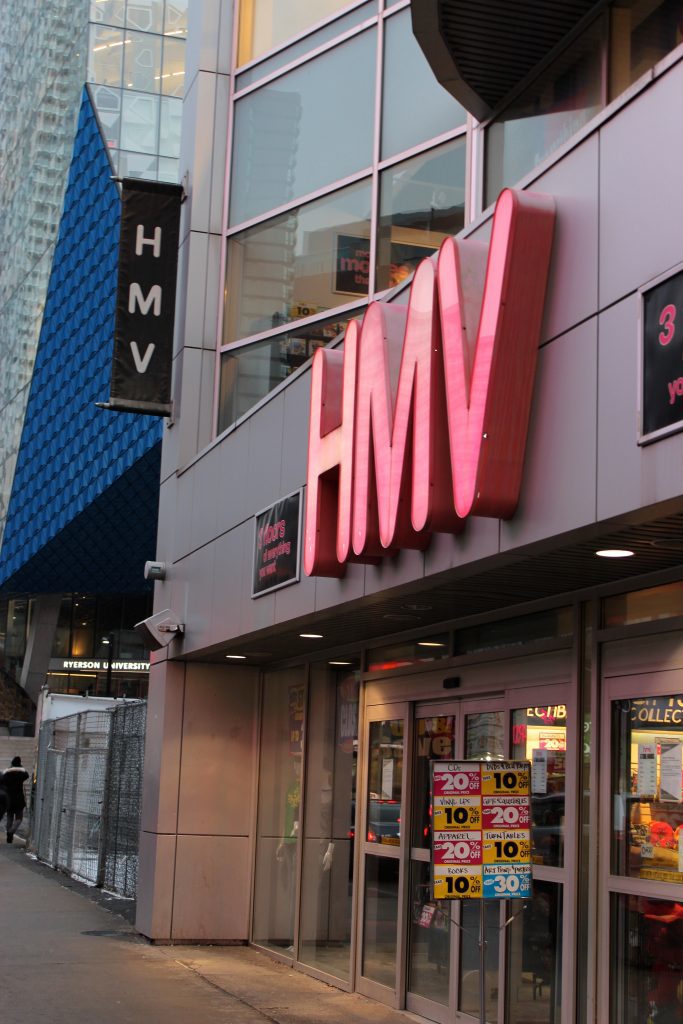 HMV at the corner of Yonge and Gould Streets. it will be closing on April 30. Robyn Bell/Ryersonian

But is that really the case? The U.S. music industry saw an 8.1 per cent increase in 2016 with streaming revenue rising by 57 per cent. While piracy is still an existing problem for the industry, Ehrlick believes that the convenience of streaming services will continue to drive music fans away from illegal downloading.

“I mean piracy eviscerated the industry,” said Ehrlick. “But it’s just so much easier to get your credit card charged 9 or 10 dollars a month for basically all the music in the world, than torrenting and hoping you get the right files and hoping there’s not a virus attached to it. It’s just too damn easy. Piracy is a dead issue, it doesn’t matter anymore.”

Laura MacMullin, a fourth-year creative industries student, listens to music on all platforms, but finds the ease of streaming advantageous .

“With things like Spotify Premium, you can download the songs you like in a legal way,” said MacMullin, 21. “I think it’s convenience more than anything else and just the ease of access to such a huge library without having to dig through physical copies to find an album.”

In a way, CDs were destined to get replaced by a newer form of technology. Ehrlick explained that the record industry is pushed forward by changing configurations. Historically, the industry had total control of recorded music and its distribution until MP3s came along. Streaming was the obvious next step for offsetting piracy and bringing revenue back to the industry.

The creation of MP3 files made the end of CDs inevitable. But is it possible for CDs to make a comeback like vinyl, which has seen a steady growth in sales? Macmullin doesn’t see it happening.

“It depends on whether it becomes a cool retro thing,” said MacMullin. “Definitely part of the vinyl resurgence is a bit of a ‘cool-hunting’ thing. But I don’t think CDs are reliable enough for the same kind of resurgence.”
HMV Canada went into receivership last week and will officially shut down their stores on April 30.

Watch: How inclusive was the Women’s March?